London Attacker Was Reportedly Identified As Abu Izzadeen, But There's A Problem: He's Still In Jail 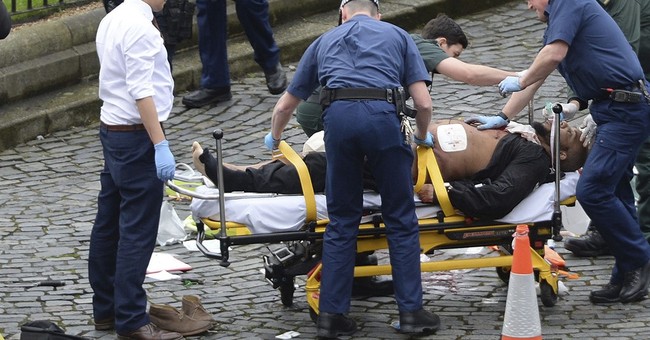 London has been attacked in what appears to be a terrorist incident—and British law enforcement is investigating it as such. Scotland Yard said that four people have died, including a police officer and the attacker, with 20 others being wounded. The injuries have been described as catastrophic. Katie wrote about how the assailant plowed through pedestrians on the Westminster Bridge near Whitehall, exited his vehicle in his attempt to enter the Palace of Westminster, where he was shot three times by police. A police officer was stabbed in the attack.

4 people have died in an attack in London. This video shows the moment the incident began outside the UK Parliament.https://t.co/FwKsndgisW pic.twitter.com/81srJq9yGr

Channel 4 News says it has confirmed the attacker was Trevor Brooks aka Abu Izzadeen, well known to the security services and the media.

The attacker was allegedly identified as Abu Izzadeen (aka Trevor Brooks), a British native and second generation Jamaican, by Channel 4 News. Izzadeen has been in trouble with the law for his advocacy of radical Islam. In 2005, he refused to condemn the July 7 London bombings:

British-born Abu Izzadeen, a spokesman for the group al-Ghurabaa [the Strangers] has declined to condemn the 7 July London bombings.

He told BBC2's Newsnight the bombings were "mujahideen activity" which would make people "wake up and smell the coffee".

In 2008, he was found guilty of inciting terrorism and given a four and a half-year prison sentence (via the Telegraph) [emphasis mine]:

Izzadeen, whose real name is Trevor Brooks, 32, led a group of Islamic radicals - including Keeler - who stormed the moderate Regents Park Mosque in central London and then forced back police who tried to evict them.

While western troops were fighting in Fallujah in Nov 2004 the group delivered a series of speeches at the mosque boasting that they were terrorists and exhorting followers to give donations to buy arms for the holy war in Iraq.

The speeches also coincided with a night of the Muslim festival of Ramadan known as the “Night of Power” and were recorded on a DVD lasting nearly five hours.

Brooks told his audience: “So we are terrorists - terrify the enemies of Allah. The Americans and British only understand one language. It’s the language of blood.”

Over the past few years, Izzadeen has been in and out of UK's legal system for his radical views. In 2015, he was sent to jail for failing to notify police of his address change, while in early 2016—he landed himself in hot water again for leaving the country without telling British authorities, according to the BBC. And here is the problem: he was given a two-year prison sentence for that infraction. He's still in jail.

Channel 4 News is now having doubts that it's Trevor Brooks -- because he's still in jail! Simon Israel looking worried.

Confirmed from multiple sources - official and community - that Trevor Brooks NOT attacker. He's still in jail despite what others report.

Editor's Note: The original post had Mr. Izzadeen as the person who executed this attack. It was immediately updated to reflect the recent developments.