I Feel Hitler In These Bleachers: Ashley Judd Triggered At KY Basketball Game When Man Said 'We Like Trump' 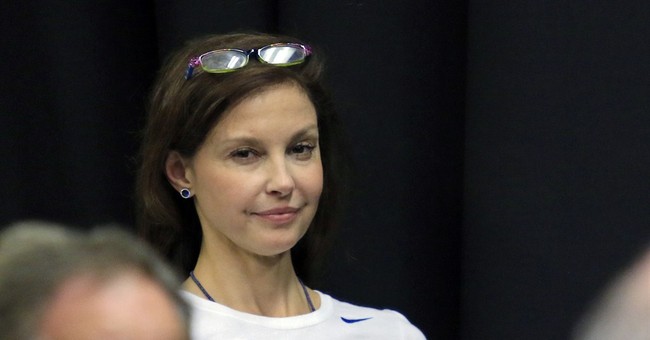 “I didn’t know devils could be resurrected, but I feel Hitler in these streets.”

Do you remember when actress Ashley Judd said that at the Women’s March in January? It was over inauguration weekend. Well, Judd found Hitler in the bleachers of a Kentucky basketball game over the weekend and was triggered when a man told her “we like Trump.” She took to Facebook to detail the incident, which she said left her “very sad” and “scared.” Oh, and then proceeded to tell what she wanted to say to the man, like he’s a misogynist and he voted with the KKK, but refrained because basketball is a unifying space [emphasis mine]:

An older man with white hair came up to me at my seat today at a basketball game. He said "May I take your picture? I said "Yes." And before I could offer for him to be in the picture with me, 6 inches from my face, he took my picture with his phone. He said "I'm from Big Stone gap." I said, "I love Big Stone Gap! What a beautiful town, I loved making the movie there." I went on to say how good the cooking is, mentioning, of course, the pineapple upside down cake and pumpkin pie!

In my mind I was getting ready to ask him about the national parks and if he ever spends time in especially the Thomas Jefferson National Park – but something inside of me was already clenching and I concluded by simply saying "I like Big Stone Gap. "

He said to me with open hostility as he was backing away, "We like Trump."

Of course, it's very clear now that as I was being friendly and talking, his affect was angry, and he certainly didn't respond in anyway to my general enthusing about his little Appalachian town. And it's also clear that his entire approach to me and aggressive sticking his phone 6 inches in front of my face to take my picture was a part of his plan to treat me with rudeness, aggression, and disrespect. Who knows, maybe he's already done something undignified with the picture or maybe it was just a pretense so he could say something menacing to me.

I feel very sad that this happened, and frankly scared. We absolutely need apolitical spaces in this country where we come together for something that is beyond who voted for whom and the platforms, beliefs, and agendas of respective candidates.

I could've easily retorted to this man, for example, with "Well, I know everything I need to know about you now, Sir, you voted with the KKK."

Or perhaps another shot, such as "Well, I voted with the popular vote which you lost by the widest margin in American history." And dragged in his charming town like he had – "sorry to discover Big Stone gap is full of misogynists like you."

Here’s the thing, this man isn’t necessarily wrong. Big Stone Gap, Virginia is in Wise County, where almost 80 percent of the vote went for Trump. Yeah, the town/county does like Trump. Moreover, she just confirmed to Trump supporters and rural voters how the Left really feels about them. If they don’t like the world according to Judd, you’re a KKK member or you’re from a hub of misogyny. If you’re not an adherent of the urban-based progressive agenda, you’re sub-human. Yeah—that’s a great outreach strategy, especially since Ms. Judd should know that Big Stone Gap man is one of millions of people that Democrats need to win back in order to retake Congress and the White House: white working class (and rural) voters. And she just called him a misogynist, and a KKK member, because he supports the president. Liberals need to understand that tens of millions of Americans voted for Trump. He won. He’s president and if you can drive from New York City to Los Angeles and not enter a county outside of urban America that Clinton won, that should probably be a huge hint that she was a terrible candidate.

Also, her #NoPoliticsHere hashtag is quite ironic since progressives think everything is political. Even posting food pictures on Instagram.

I'm sorry you feel that way. #basketball should be a space we all hang out together & love our team. #nopoliticshere we have breaks https://t.co/v4LaOu6dnx