DHS: The Military Won't Be Used To Deport People, Despite That Fake AP News Story That Caused Undue Drama 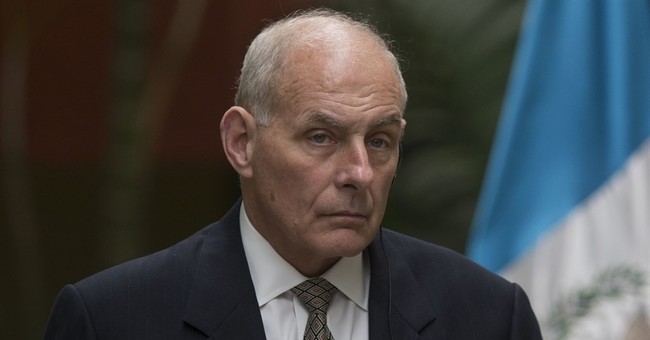 Last week, the Associated Press published a wild story about 100,000 National Guardsmen from 11 states being used to round up illegal aliens. For liberals, this was a sign of the dark days that are ahead, except none of this was true. Yes, there was a draft memo from the Department of Homeland Security, though it was an early, pre-decision draft—and no one took it seriously. It wasn’t even written by DHS Secretary John Kelly. T. Becket Adams of The Washington Examiner, along with lawyer Gabriel Malor, took apart the memo—with Malor reading it and finding no such passage where the 100,000-man figure is mentioned. Nor is there any mention of the National Guard being used to round up illegal aliens. The only newsworthy item is that the DHS has a draft of a memo. The 100,000-figure is the linchpin of this story and it’s nowhere to be found.

This is fake news, folks. I know conservatives have used that term to delegitimize articles with which they disagreed with, though were accurate—but this is truly fake news. Just like it was total bunk when the news media reported that the Martin Luther King. Jr. bust was removed from the Oval Office. It wasn’t. And Treasury Secretary Steve Mnuchin didn’t boot an old lady from her home for a 27¢ payment error on her mortgage, but I digress.

The DHS made it clear that the National Guard won’t be used to deport illegal immigrants during immigration enforcement operations (via The Hill):

Homeland Security Secretary John Kelly on Thursday pledged the military would not be used to expel undocumented immigrants from the U.S.

“Let me be very, very clear, there will be no, repeat, no mass deportations,” he said. “Everything we do in DHS will be done legally and according to human rights and the legal justice system of the United States.”

The comments came just hours after President Trump called the new deportation push a “military operation,” which threatened to heighten the concerns of immigrant-rights groups and the Mexican government.

"There will be no, no use of military force in immigration,” Kelly said, telling the news media only "half of you get that right.”

Kelly may have been referring to a draft proposal, which was never adopted, to enlist roughly 100,000 National Guard troops to apprehend undocumented immigrants in nearly a dozen states.

Still, the damage from this story was done. Even Senate Minority Leader Chuck Schumer cited it during a presser last week.