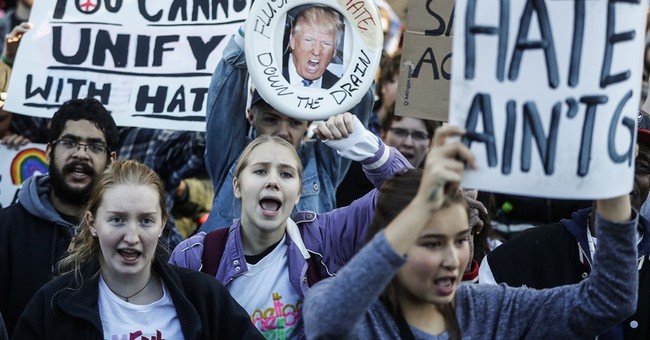 Again, for many in America, history began on November 8, 2016. Donald Trump has beaten Hillary Clinton—and now everything and everyone is going to die. They lit dumpsters on fire and dabbled in insane theories about Russia hacking the election results, which did not happen. And how the president is pretty much Hitler. Ironically, in a way, the Left’s reaction to Trump’s win is doing nothing but guaranteeing a second term for the man, but I digress. There are women’s marches, town hall theatrics, fires, rioting, and other acts of Bolshevik theater. What’s next? Oh, how about federal income tax evasion (via The Guardian):

Andrew Newman always pays his taxes, even if he hates what the government is doing with them. But not this year. For him, Donald Trump is the dealbreaker. He’ll pay his city and state taxes but will refuse to pay federal income tax as a cry of civil disobedience against the president and his new administration.

Newman is not alone. A nascent movement has been detected to revive the popularity of tax resistance – last seen en masse in America during the Vietnam War but which has been, sporadically, a tradition in the US and beyond going back many centuries.

Among famous faces, Mia Farrow has tweeted about tax resistance. Gloria Steinem is also planning to take part in the movement.

In an email to the Guardian, Steinem said: “In 1968, we refused to pay the 10% of our Federal income tax dollars that funded the war in Vietnam, and included a letter to the IRS saying so. In February before tax time on March 15, 500 or so of us listed our names in ads that we published in the New York Times, together with a quote [from] Thoreau on Civil Disobedience, and an invitation to join us.”

She added: “I’m going to do this again by sending what I think should go to Planned Parenthood, deducting it from my Federal IRS return, and including a letter saying so.

Taylor is passionate about refusing to pay federal income tax until Trump releases his returns – but is currently undecided about whether she can afford it, with two children in college needing her support, she said.

Meanwhile, there is talk in California of the state becoming an “organized non-payer” of its dues to the federal government and urging non-compliance with the federal tax code if Trump cuts off federal funding to its “sanctuary cities” – Los Angeles, San Francisco and Sacramento – if they do not cooperate with demands to hand over undocumented immigrants.

I’m starting to get whiplash here, folks. Remember when Russia wasn’t our biggest geopolitical foe in 2012? Well, now they’re the roots of all evil that has attacked the integrity of our elections by not swaying the outcome, despite a prolonged propaganda campaign, which isn’t the same as hacking. In 2008, Joe Biden said