Remember When: Hey Liberal Media, This Is Probably Why President Trump Didn't Call On You Today 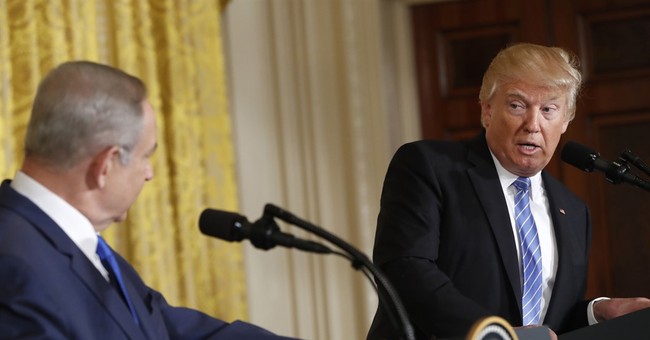 Our own Katie Pavlich asked President Donald Trump and Israeli Prime Minister Benjamin Netanyahu about how to deal with Iran after their blatant violations of the nuclear agreement and what compromises both the Israelis and the Palestinians need to consider in their ongoing conflict with one another. These are legitimate questions. The Israeli-Palestinian conflict is always going to be a topic with these visits and Iran recently conducted a missile test. As Cortney noted, the liberal media was ignored and they went into full meltdown mode. CNN’s Jim Acosta said that the “fix is in” concerning who will be able to ask the president questions, describing Townhall as “a very conservative website.”

"Townhall is not a legitimate media source. Only we from NBC who edited 9/11 audio calls and rehired Brian Williams should ask questions"

Liberal reporters who asked suck up questions to Obama for years now complaining that conservatives get questions at press conferences.

Yes, the right-leaning and conservative press is having their day in the sun, since the liberal media can’t seem to get their act together, reporting on fake stories about the removal of MLK bust Jr.'s, botching the foreclosure story involving Treasury Secretary Steve Mnuchin (no, he didn’t kick some old lady out of her house over 27¢), and renaming black history month. Guy will have a more in-depth analysis over the media’s hysterics later.

I’ll just leave this insufferable exchange between former President Obama and the Chicago Tribune’s Christi Parsons after his 2012 re-elect win to show why we probably shouldn't be shocked that the Trump White House is taking questions from outlets who used to be left in the dark (via Newsbusters):

CHRISTI PARSONS (Chicago Tribune): Thank you, Mr. President. And congratulations, by the way. One quick follow-up–

OBAMA: Thanks. Christi was there when I was running for state senate.

PARSONS: That's right. I was!

OBAMA: Christi and I go back a ways.

PARSONS: I have never seen you lose. I wasn't looking that one time.

OBAMA: There you go.

As Scott Whitlock mentioned, this is fan girl antics. The news media gushed over Obama for eight years, who also routinely ignored conservative news outlets. So, Trump ignores liberals and finally gives conservative ones some oxygen—and my god—they actually have something pertinent to ask.

I think questions about Iran and the Israeli-Palestinian conflict are, well, much better than asking Trump what has enchanted him the most about serving as president. Jeff Zeleny, who was then working for The New York Times, threw that beach ball question at Obama in 2009.

President Obama: "Now let me write this down," the president quipped. He looked down at the podium. "I've got..."

Police Release Body Camera Footage of Officer-Involved Shooting That Set Off Riots
Townhall
WaPo's Aaron Blake is just appalled that John Cornyn would make the kind of 'baseless and ugly innuendo' about Joe Biden that Aaron Blake made about Donald Trump
Twitchy
Buyer's Remorse Sets in as Sen. Warnock Makes Stunning Admission About Prior Statement on GA Voting Law
Redstate
Insanity Wrap #185: One of Our Vice Presidents Is Missing!
PJ Media