The Media Can't Attack Gorsuch On Much...So They Went After His Mother 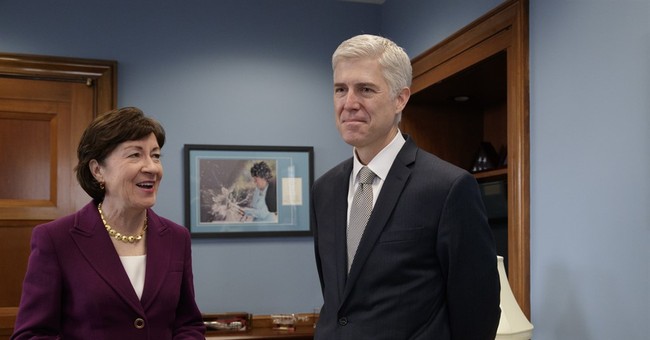 Pretty much everyone has lauded President Trump’s Supreme Court nominee Neil Gorsuch. The man is eminently qualified. He has academic credentials that are impeccable –he has a Ph.D. from Oxford—and he’s unified the Republican Party behind his nomination. As for Democrats, you have some, like Sen. Jeff Merkley (D-OR), threatening to go to the mattresses and filibuster his nomination. Yet, Democratic opposition has splintered. Senate Minority Leader Chuck Schumer had an eight-vote buffer regarding cloture, which appears to have been met when nine of his fellow Democrats said they wouldn’t back a filibuster, and that Gorsuch deserves a hearing and an up-or-down vote. That’s the ballgame. Still, the attacks on his character are probably going to ramp up from left wing groups.

The media fired their first salvo at him, reporting that he founded a “Fascism Forever Club” in high school. It turned out to be a joke. So, how can we paint Gorsuch as a bad apple? Well, let’s go after his mother, which is what McClatchy did. Anne McGill Gorsuch Burford was the EPA administrator under Reagan and her reported mismanagement has tainted Gorsuch’s name. Are you kidding me?

Her stewardship as EPA administrator was marked by a string of revelations of cozy ties with chemical companies and attempts to purge the agency of scientists and enforcement staffers tasked with minimizing the presence of toxins in the air and water. Headlines about the scandal dominated the news for months in late 1982 and early 1983.

There were secret “hit lists” of agency employees targeted for dismissal, decisions to ease regulation of dioxin and dangerous pesticides, and allegations that Burford made politically driven decisions to slow cleanups at Superfund toxic waste sites – those containing the most hazardous chemicals.

When a House of Representatives subcommittee subpoenaed agency records about three of the Superfund sites, Burford refused to turn them over, leading to a contempt of Congress citation that threatened her with jail time.

As multiple congressional committees held hearings on EPA mismanagement, more than 20 agency officials resigned, most of them Reagan political appointees.

Burford was the last, resigning on March 9, 1983, after White House lawyers refused to back up her claim of executive privilege to justify her refusal to surrender the Superfund files.

She died of cancer in 2004 at age 62, leaving behind a bit of reputational baggage for her son.

Okay—why does this matter and how does this torpedo Gorsuch’s nomination? It doesn’t. Gorsuch is probably going to be confirmed and way for McClatchy to kick a dead woman who passed away from cancer. Did Neil, who was 16 at the time of his mother’s resignation from the EPA, know about all of this stuff? Probably not. It’s just a cheap shot to say that his mother was a lackluster EPA administrator, so he must be a mediocre judge. Not the case. In fact, that’s empirically false. The Supreme Court hasn’t overturned any of Gorsuch’s opinions on the appellate court.

Mrs. Gorsuch left behind “reputational baggage for her son”—that’s just pure crap. If Mrs. Gorsuch is used at his confirmation hearings to somehow discredit him, you know that the Democrats have got nothing.