No, Neil Gorsuch Didn't Have A 'Fascism Forever Club' In High School 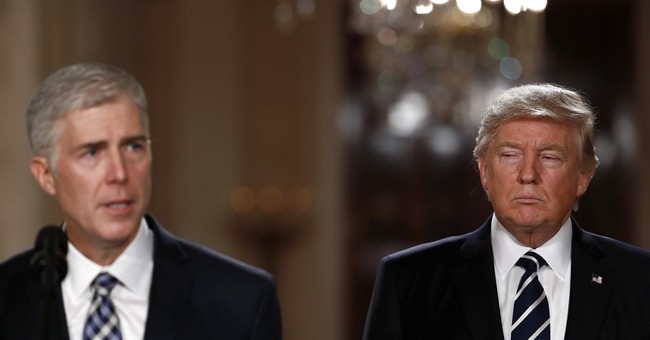 We all know the smear campaign against Judge Neil Gorsuch is coming. The appellate judge was nominated by President Trump Tuesday night to fill the Supreme Court vacancy left by the late Antonin Scalia. As a result, the Left must destroy him. They must make him look like he’s a step below some creature that consumes human flesh. Okay—not really, but you get the point. It could get ugly. How to soften him up? Well, let’s talk about how he founded a “Fascism Forever Club” in high school, which the Daily Mail reported this week. The problem: it was a joke. Michael O'Loughlin of the left-leaning Jesuit magazine America had more (via America Magazine):

He wrote that he founded and led the “Fascism Forever Club,” though those with knowledge of the school back in the 1980s say there was no such club. The mention of it in the yearbook was a tongue-in-cheek attempt to poke fun at liberal peers who teased him about his fierce conservatism.

It was “a total joke,” said Steve Ochs, a history teacher at Georgetown Prep who was the student government advisor during Mr. Gorsuch’s junior and senior years at the Bethesda, Md., school.

“There was no club at a Jesuit school about young fascists,” he told America. “The students would create fictitious clubs; they would have fictitious activities. They were all inside jokes on their senior pages.”

Gorsuch is eminently qualified to fill Scalia’s vacancy. The Senate unanimously confirmed him to take the seat on the Tenth Circuit Court of Appeals. Editorial boards from across the country have voiced their support for a hearing and a vote for Judge Gorsuch, with some saying that if no red flags are found in the discovery process, he should be confirmed.

Right now, there are some Democrats who support a hearing and a vote. In fact, several do, which puts the all-out war strategy that the progressive base of the Democratic Party so desperately wants from their congressional leaders in doubt.

Why is the Government Using Black Tarps to Hide Illegal Immigrant Men at the Airport?
Katie Pavlich