Yes, The Trump Executive Order On Immigration Is Legal 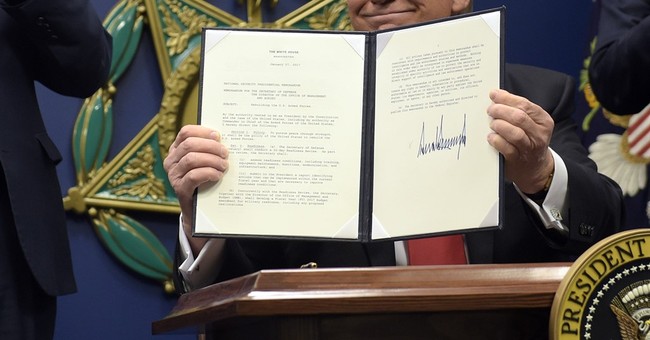 This weekend saw the institutional Left go into another frenzy over President Donald J. Trump’s executive order on immigration, specifically the so-called Muslim ban. It’s unconstitutional. It’s illegal. It’s not who we are. Rabble. Rabble. Rabble.

Now, there is a legitimate criticism of the executive order regarding green card holders, which Lawfare Blog ripped into over the weekend. Yet, they do admit that the president has vast power to enact this “malevolent” order:

…yes, the order is malevolent. But here’s the thing: Many of these malevolent objectives were certainly achievable within the president’s lawful authority. The president’s power over refugee admissions is vast. His power to restrict visa issuances and entry of aliens to the United States is almost as wide.

Today White House Chief of Staff said that the order would not apply to green card holders.

At National Review, lawyers Andrew McCarthy and Dan McLaughlin wrote about how the orders were legal and not all that much of a departure from Obama’s immigration policy regarding refugees, visas, and national security—though McLaughlin added that he was troubled that the Trump administration was diluting America’s tradition of taking in refugees and granting asylum to those who have been persecuted for a variety of sociopolitical reasons.

At the same time, he noted that the Obama administration also discriminated against Christian Syrian refugees, ended the wet foot, dry foot policy with Cubans fleeing their communist hell hole, and stopped processing Iraqi visas for six months in 2011. Oh, and some of those visa applicants served as interpreters for the U.S. military and provided intelligence to our forces. But a Democrat was in the White House, and as McLaughlin cited, Cubans are more conservative-leaning voters, therefore not a priority for liberals, nor are persecuted Christians in the Middle East. It’s not worthy of liberal outrage, but now with Republicans back in power—everything is triggering.

Guy will go further into this tomorrow, but McLaughlin also mentioned that this isn’t a “Muslim ban.” Only seven of the world’s 50 majority Muslim countries are on the list, (Indonesia is the world’s most populous Muslim country; they’re not on the list) with three of them being pegged by the State Department as state sponsors of terror.

Yet, let’s back to the legality of it:

Even more ridiculous and blinkered is the suggestion that there may be something unconstitutional about refusing entry to refugees or discriminating among them on religious or other bases (a reaction that was shared at first by some Republicans, including Mike Pence, when Trump’s plan was announced in December 2015). There are plenty of moral and political arguments on these points, but foreigners have no right under our Constitution to demand entry to the United States or to challenge any reason we might have to refuse them entry, even blatant religious discrimination. Under Article I, Section 8 of the Constitution, Congress’s powers in this area are plenary, and the president’s powers are as broad as the Congress chooses to give him. If liberals are baffled as to why even the invocation of the historically problematic “America First” slogan by Trump is popular with almost two-thirds of the American public, they should look no further than people arguing that foreigners should be treated by the law as if they were American citizens with all the rights and protections we give Americans.

Liberals are likewise on both unwise and unpopular ground in sneering at the idea that there might be an increased risk of radical Islamist terrorism resulting from large numbers of Muslims entering the country as refugees or asylees. There have been many such cases in Europe, ranging from terrorists (as in the Brussels attack) posing as refugees to the infiltration of radicals and the radicalization of new entrants. The 9/11 plotters, several of whom overstayed their visas in the U.S. after immigrating from the Middle East to Germany, are part of that picture as well. Here in the U.S., we have had a number of terror attacks carried out by foreign-born Muslims or their children. The Tsarnaev brothers who carried out the Boston Marathon bombing were children of asylees; the Times Square bomber was a Pakistani immigrant; the underwear bomber was from Nigeria; the San Bernardino shooter was the son of Pakistani immigrants; the Chattanooga shooter was from Kuwait; the Fort Hood shooter was the son of Palestinian immigrants. All of this takes place against the backdrop of a global movement of radical Islamist terrorism that kills tens of thousands of people a year in terrorist attacks and injures or kidnaps tens of thousands more.

There are plenty of reasons not to indict the entire innocent Muslim population, including those who come as refugees or asylees seeking to escape tyranny and radicalism, for the actions of a comparatively small percentage of radicals. But efforts to salami-slice the problem into something that looks like a minor or improbable outlier, or to compare this to past waves of immigrants, are an insult to the intelligence of the public.

Oh wait—what about the Immigration and Nationality Act of 1965 (aka Hart-Cellar Act)? Doesn’t that make Trump’s executive orders unconstitutional? No. As McCarthy noted, Hart-Cellar was due to removing the skewing of immigration quotas away from Western European nations. This order is being issued as a national security priority. Additionally, there is no overreach with these orders, as cited in the Constitution and the Supreme Court. McCarthy goes into a bit of history before digging into the legality of the order, citing U.S. v. Curtiss-Wright as judicial precedent for the primacy of the executive over Congress in realm of international relations.

“If there is arguable conflict between a presidential policy and a congressional statute,” writes McCarthy. “The president’s policy will take precedence in the absence of some clear constitutional commitment of the subject matter to legislative resolution.”

Also, the list of nations in the order has its roots from the Obama White House. They laid down the groundwork:

Cato Institute’s David J. Bier claims the temporary suspension is illegal because, in his view, it flouts the Immigration and Nationality Act of 1965. This contention is meritless, both constitutionally and as a matter of statutory law.

Mr. Bier asserts that Trump may not suspend the issuance of visas to nationals of specific countries because the 1965 immigration act “banned all discrimination against immigrants on the basis of national origin.” And, indeed, a section of that act, now codified in Section 1152(a) of Title 8, U.S. Code, states that (with exceptions not here relevant) “no person shall receive any preference or priority or be discriminated against in the issuance of an immigrant visa because of the person’s race, sex, nationality, place of birth, or place of residence” (emphasis added).

Even on its face, this provision is not as clearly in conflict with Trump’s executive order as Bier suggests. As he correctly points out, the purpose of the anti-discrimination provision (signed by President Lyndon Johnson in 1965) was to end the racially and ethnically discriminatory “national origins” immigration practice that was skewed in favor of Western Europe. Trump’s executive order, to the contrary, is in no way an effort to affect the racial or ethnic composition of the nation or its incoming immigrants. The directive is an effort to protect national security from a terrorist threat, which, as we shall see, Congress itself has found to have roots in specified Muslim-majority countries. Because of the national-security distinction between Trump’s 2017 order and Congress’s 1965 objective, it is not necessary to construe them as contradictory, and principles of constitutional interpretation counsel against doing so.

Trump’s executive order also expressly relies on an Obama-era provision of the immigration law, Section 1187(a)(12), which governs the Visa Waiver Program. This statute empowers the executive branch to waive the documentation requirements for certain aliens. In it, Congress itself expressly discriminates based on country of origin.

Under this provision, Congress provides that an alien is eligible for the waiver only if he or she has not been present (a) in Iraq or Syria any time after March 1, 2011; (b) in any country whose government is designated by the State Department as “repeatedly provid[ing] support for acts of international terrorism”; or (c) in any country that has been designated by the Department of Homeland Security as a country “of concern.”

So, again, it’s not a Muslim ban. In some ways, it’s a major departure from what the Obama administration executed, though with fewer snowflakes protesting at airports. And it’s legal.