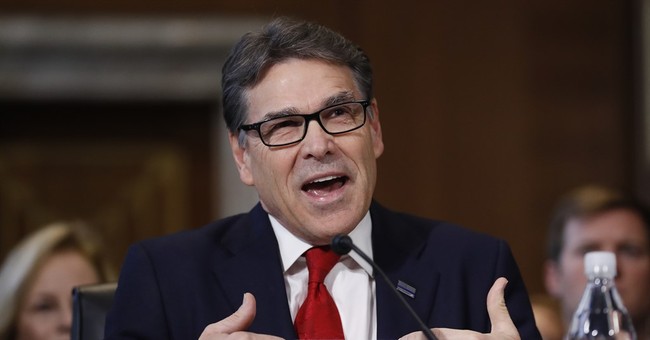 Via Cortney, Hot Air’s Ed Morrissey, The Washington Examiner's T. Becket Adams, and The Federalist’s Mollie Hemingway and Sean Davis, we have another possible fake news alert regarding The New York Times. The first salvo was the news media’s insistence that there was an election hack. There was not. The Democratic National Committee was hacked by Russian-backed hackers—and they flooded social media with propaganda and trolls. That’s not tampering with election tallies, which a majority of Democrats think happened, but we digress.

The New York Times got media circles in panic mode over their story about former Republican Texas Governor Rick Perry reportedly not understanding the role of energy secretary. The problem is that the story has fallen apart due to past statements from Perry that contradicts what the Times spewed out. So, was there a correction? Nope. The Times is standing by their story. First, let’s rehash what was said by the publication:

NYT says: "We stand by our story, which accurately reflected what multiple, high-level sources told our reporters." https://t.co/o7vT4aS19y

When President-elect Donald J. Trump offered Rick Perry the job of energy secretary five weeks ago, Mr. Perry gladly accepted, believing he was taking on a role as a global ambassador for the American oil and gas industry that he had long championed in his home state.

In the days after, Mr. Perry, the former Texas governor, discovered that he would be no such thing — that in fact, if confirmed by the Senate, he would become the steward of a vast national security complex he knew almost nothing about, caring for the most fearsome weapons on the planet, the United States’ nuclear arsenal.

Two-thirds of the agency’s annual $30 billion budget is devoted to maintaining, refurbishing and keeping safe the nation’s nuclear stockpile; thwarting nuclear proliferation; cleaning up and rebuilding an aging constellation of nuclear production facilities; and overseeing national laboratories that are considered the crown jewels of government science.

“If you asked him on that first day he said yes, he would have said, ‘I want to be an advocate for energy,’” said Michael McKenna, a Republican energy lobbyist who advised Mr. Perry’s 2016 presidential campaign and worked on the Trump transition’s Energy Department team in its early days. “If you asked him now, he’d say, ‘I’m serious about the challenges facing the nuclear complex.’ It’s been a learning curve.”

As Cortney pointed out, Perry knew that safeguarding our nuclear arsenal was part of the job. It was in

The New York Times ran a story by Coral Davenport and David E. Sanger that claimed, without any sourcing or substantiation, that Rick Perry thought the secretary of Energy job he was about to take was as “a global ambassador for the American oil and gas industry” but then he “discovered that he would be no such thing.” The reporters claimed, again with zero evidence to substantiate their claims, that he only then learned “he would become the steward of a vast national security complex he knew almost nothing about, caring for the most fearsome weapons on the planet, the United States’ nuclear arsenal.”

These odd allegations went on and on, followed by a vague quote from an energy lobbyist who may have been around the transition for the first few days, but was apparently let go nearly a month before Perry was even named, saying that Perry cared about energy advocacy and is now focused on the challenges of the nuclear complex. To be clear, Perry was nominated on December 13, 2016. The man with the boring quote in The New York Times piece speaking to Perry’s knowledge was let go by November 18.

Even apart from the problems with the lackluster sourcing for the dramatic claims, the story runs completely counter to the facts. As John Davidson wrote here last month, “[A]s governor of Texas Perry actually has some experience dealing with [the nuclear] issue. After all, the largest nuclear maintenance facility in the country is just outside Amarillo. Nearly every nuke in the country makes its way through the Pantex Plant in northern Texas, which ensures their continued capability and functionality. Perry worked with National Nuclear Security Administration for more than a decade, ensuring the security of Pantex and every piece of freight into and out of it.”

Ed noted that McKenna’s quote is merely speculation on Perry's state of mind, not an actual testimony of what occurred through meetings with Perry because McKenna wasn’t in the room:

Let’s get back to their single source for Perry’s supposed ignorance. As both Hemingway and Adams point out, McKenna wasn’t even around when Perry got the appointment in December, having left the transition team on November 16th — eight days after the election. In fact, as a quick scan of our own archives shows, Perry didn’t meet with the transition team until December 12th, four weeks after McKenna’s departure, and was appointed the next day.

Therefore, it’s impossible for McKenna to have been a source for Perry’s assumptions either during the meeting or at the appointment. Even without that knowledge, though, it’s clear from the quote that it’s only McKenna speculating on Perry’s state of mind, not actual testimony. “If you asked him on that first day” is nowhere near “I spoke to him on that first day,” or “He told Trump on that first day …” It’s McKenna projecting himself into Perry’s mind.

Dalton: "[You] probably know a big part of the Department of Energy is National Security and Nuclear, nuclear arsenal..."
Perry: "Yep"
(2/2)

Ed added that McKenna told The Daily Caller that the Times had twisted his quote, that the lede was misleading, and of course Gov. Perry knew exactly what the Department of Energy does. Like in Hemingway’s post, he also cited that Amarillo, Texas is the main site where the nation’s nuclear weapons are assembled and disassembled.

So, the Times' main source got the boot almost a month before Perry’s formal nomination. The same person then says that his words were twisted, and that Perry understands the role. A statement from Perry upon his nomination in December shows that he knew nuclear arms were going to be part of his responsibility, which guts the core of this hit piece.

Along with Hemingway, Federalist colleague Mary Katharine Ham also questioned the article on Twitter, which did not make Times editor Patrick LaForge happy. The tweet from LaForge was deleted, though The Weekly Standard’s Mark Hemingway (husband of Mollie) and Twitchy were able to capture the exchange. LaForge told Mollie to “go watch Fox.”

"Go watch Fox" seems like an ad hominem and inadequate response to legitimate criticism, but I guess that's why I'm not an NYT editor. pic.twitter.com/LB9xlW7trV

Hell of a lede in that New York Times Rick Perry Story! When are they going to run the article that actually goes along with it?