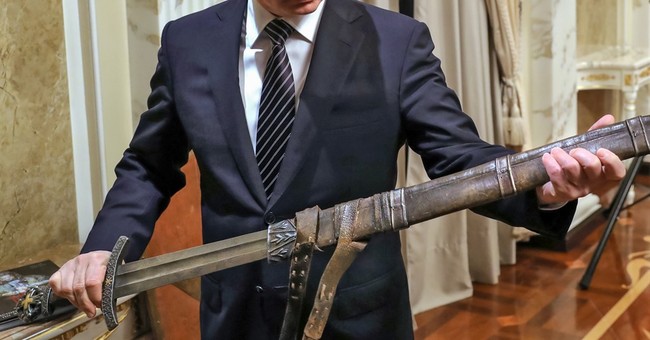 Besides the tragic shooting at an airport in Fort Lauderdale, the Office of the Director of National Intelligence, released their report on Russia’s cyber activities during the 2016 election. Along with the CIA, FBI, and NSA, their conclusion is hardly a surprise. With high confidence, they assess that Russian President Vladimir Putin ordered his nation's intelligence agencies to run interference in our recent election, denigrate Hillary Clinton, and ensure that Donald Trump would emerge victorious. They also unleashed a deluge of propaganda through state-funded media sources and social media trolls. Keep in mind, that not all 17 intelligence agencies have agreed on this conclusion (Via DNI):

Russian efforts to influence the 2016 US presidential election represent the most recent expression of Moscow’s longstanding desire to undermine the US-led liberal democratic order, but these activities demonstrated a significant escalation in directness, level of activity, and scope of effort compared to previous operations.

We assess Russian President Vladimir Putin ordered an influence campaign in 2016 aimed at the US presidential election. Russia’s goals were to undermine public faith in the US democratic process, denigrate Secretary Clinton, and harm her electability and potential presidency. We further assess Putin and the Russian Government developed a clear preference for President-elect Trump. We have high confidence in these judgments.

Moscow’s influence campaign followed a Russian messaging strategy that blends covert intelligence operations—such as cyber activity—with overt efforts by Russian Government agencies, state-funded media, third-party intermediaries, and paid social media users or “trolls.” Russia, like its Soviet predecessor, has a history of conducting covert influence campaigns focused on US presidential elections that have used intelligence officers and agents and press placements to disparage candidates perceived as hostile to the Kremlin

While troubling, this isn’t hacking in the sense that liberals are suggesting, where they allege that Russia hacked the results that ended in Hillary Clinton's upset loss in November. The Obama administration hasn’t challenged the results either. The Department of Homeland Security noticed no spike in malicious cyber activity that would have suggested an attack on election night. Russia didn’t want Clinton to win, so they annoyed us with trolls and fake news. Is that any different than when the Obama administration gave hundreds of thousands of dollars to an Israeli group who used the money to bankroll an anti-Benjamin Netanyahu effort during the 2015 elections? The money that was given to the group, OneVoice, was thought to have been to be spent of furthering Israeli-Palestinian peace negotiations. The Washington Times reported that OneVoice told the State Department what the money was really going to be used for, though State denied seeing any such cables.

Yet, getting back to the intelligence report, the areas where Trump trounced Clinton used paper ballots—and the program used in Pennsylvania’s voting systems isn’t connected to the Internet. Clinton just lost the election.

President-elect Donald J. Trump issued a statement, saying that Russia, China, and other countries attempt to break into our cyber infrastructure on a daily basis, but this propaganda deluge had no effect on the election results. Yet, he also promised to strengthen cyber security. Outgoing Director of National Intelligence James Clapper said there was zero evidence that Russia changed any votes during a Senate hearing yesterday.

While the Left is freaking out and the Obama White House is kicking out Russian diplomats—why didn’t they react this way when China hacked the U.S. Office of Personnel Management in 2015, which was much more serious than Russian-backed hackers infiltrating the Democratic National Committee? In that hack, China took the Social Security numbers, fingerprints, names, and addresses from millions of government workers. It was so serious that we pulled our intelligence agents out of China due to fears of being compromised.

Editor's Note: The headline and the lede have been changed to better reflect the accuracy of the report, while noting that not all 17 agencies have agreed on its conclusion.