Incoming Democratic Senator: The Number Of Generals In Trump’s Cabinet Is A ‘Real Danger’ 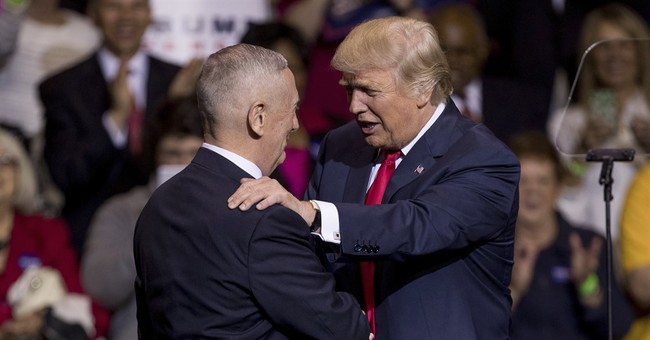 Prior to the Christmas and Hanukkah celebrations, Senator-elect Tammy Duckworth got on a little bit of a conspiracy tangent when she voiced her concern about President-elect Donald Trump selecting so many retired generals for his cabinet. Yes, that’s right; to cite Heat Street’s Andrew Stiles, Ms. Duckworth is on junta watch (via The Hill):

We're the greatest nation on the face of the Earth, and the greatest democracy, because we're not a military junta," Duckworth, an Iraq war combat veteran and incoming senator, told David Axelrod on "The Axe Files" podcast, produced by the University of Chicago Institute of Politics and CNN.

"So we shouldn't be starting on that slippery slope towards it."

Other Democrats have similarly expressed concern over the decision.

First, we’re not a democracy; the United States is a constitutional federal republic. Second, enough with the junta talk, drama llamas—there is no evidence that Gens. Flynn, Kelly, and Mattis are plotting a military coup. Only in John Frankenheimer ’s Seven Days In May was such an odious thing being hashed out at the Pentagon, but that’s not relevant because it’s a work of fiction. It’s not real.

Rep. Tulsi Gabbard (D-HI) is a veteran who still serves in the Army National Guard. She told CNN’s Jake Tapper earlier this month that she finds the criticism of Trump picking too many retired generals “pretty offensive,” calling it discriminatory against members of the military who have devoted their lives to protecting their country, gave an oath to do so, and know full well the dedication to service and duty. As a result, Gabbard added that these men would be the best choices to defend our system of government. Duckworth should know this dedication as well; she’s an Army veteran who lost both of her legs during her tour in Iraq.

Democrats have been whining about Trump, Clinton’s loss, the Electoral College, and how Trump really lost because he got fewer popular votes than Clinton (which is true but irrelevant since that’s not we elect presidents). So, I guess throwing out scare tactics, like Trump might be picking too many veterans and that’s a problem because…military junta…is just another way to undercut the president-elect and feed the Left’s anti-military proclivities.