2016 Election: Electors Cast Their Ballots, Probably Relieved To Be Out Of The Crosshairs 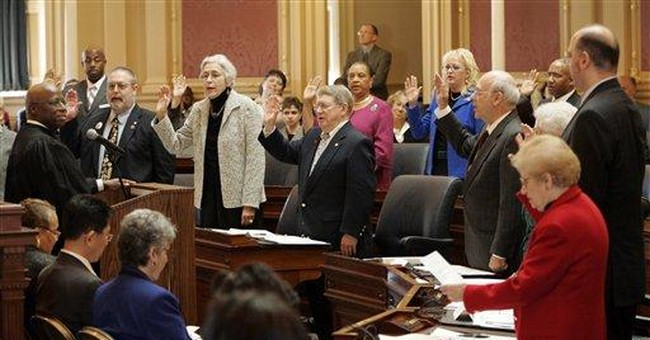 UPDATE: Trump has clinched 304 electoral votes, more than enough for him to officially become the next president of the United States.

As we speak, the electors across the country are casting their ballots in their respective state capitals. The Electoral College is expected to officially name President-elect Donald Trump as the winner of the 2016 election in one of the most stunning upsets since Harry Truman beat Thomas Dewey in 1948. Yet, between Election Day and December 19, electors have been harassed, with some losing business and others receiving death threats (via Politico):

The nation’s 538 presidential electors have been thrust into the political foreground like never before in American history. In the aftermath of a uniquely polarizing presidential contest, the once-anonymous electors are squarely in the spotlight, targeted by death threats, harassing phone calls and reams of hate mail. One Texas Republican elector said he’s been bombarded with more than 200,000 emails.

“I never can imagine harassing people like this. It’s just f----- up,” said Jim Rhoades, a Republican elector from Michigan who runs a home inspection service. “I’ve lost a bunch of business.”

The body’s 306 Republicans have faced the most acute pressure of all. Several, like Rhoades, told POLITICO they receive thousands of emails a day from anti-Trump advocates, much of it auto-generated from forms available online. Others say they’re receiving pressure from national Republicans and the Trump campaign to make sure they remain loyal.

“The Trump campaign is calling. The Republican Party of Texas is calling. They’re trying to lock down the votes,” said Texas GOP elector Alexander Kim, who estimated he has received at least 30 such calls. One RNC insider, he said, called him three times in one hour to get a response.

Chris Suprun of Texas, the only GOP elector to publicly oppose Trump, has been especially battered by criticism — mainly from fellow Republicans, including party leaders who have questioned his integrity.

Liberals are pulling all the stops to try and block Trump from winning, even forming a group called Hamilton Electors, that sought to strike down state laws that bound electors to the winner of their state. They also lobbied Republican electors to break from Trump and rally around Ohio Gov. John Kasich as an alternative; Kasich has strongly discouraged electors from doing this, saying they should honor the results of the election. Yet, the number of electors defecting was a tall order and that Hail Mary pass to stop the president-elect was torpedoed when two Colorado-based judges, one of them a federal judge nominated by President Bill Clinton, threw out the lawsuit filed by two electors, telling them they have to vote for the statewide winner.

The Associated Press reported that Republican electors view Trump’s win and their vote as a vindication that the Electoral College prevents the big states and cities that heavily lean Democratic from drowning out the voices from Middle America, whereas some Democratic electors still cling to the notion that whoever wins the most votes should win the election. The publication also noted last week that there are more than enough GOP electors to declare Trump the winner, and that there is little to no appetite for a revolt within the college that could lead to the mass defection that the Left and some anti-Trump Republicans are hoping for today.