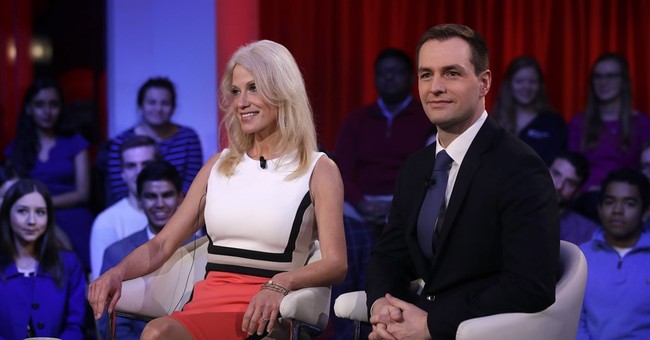 Well, the quadrennial meeting of the top political strategists and operatives at Harvard University’s Kennedy School of Government showed one thing: the Clinton and Trump camps do not like each other and probably never will. The two-day meeting is where all the players of the presidential election meet, discuss, and analyze what went right and wrong for their respective candidates. The Washington Post added that it’s an exercise in record-taking for the 2016 cycle that usually civil, with operatives showing signs of respect to their colleagues. That wasn’t the case here:

“If providing a platform for white supremacists makes me a brilliant tactician, I am proud to have lost,” she said. “I would rather lose than win the way you guys did.”

Joel Benenson, Clinton’s chief strategist, piled on: “There were dog whistles sent out to people. . . . Look at your rallies. He delivered it.”

At which point, [Trump campaign manager Kellyanne] Conway accused Clinton’s team of being sore losers. “Guys, I can tell you are angry, but wow,” she said. “Hashtag he’s your president. How’s that? Will you ever accept the election results? Will you tell your protesters that he’s their president, too?”

Clinton campaign manager Robby Mook also acknowledged that her operation had made a number of mistakes and miscalculations, while being buffeted by what he repeatedly described as a “head wind” of being an establishment candidate in a season where voters were eager for change.

He [Mook] and others also faulted FBI Director James B. Comey for deciding in the waning days of the campaign to revive the controversy over Clinton’s use of a private email server.

Again, we see the Clinton team unable to see how much their candidate sucked. Clinton didn’t take her email fiasco seriously, which gave the impression to voters that she played by a different set of rules; she ignored white working class voters that slaughtered her at the polls on November 8; and she was so terrible that millions of Obama supporters flipped for Trump. James Comey did not cost Clinton the election. To say otherwise is just an exercise in willful ignorance that many saw Clinton as a dishonest relic of the past, who didn’t seem interested or concerned with the issues impacting voters. Her alleged unethical dealings at the Clinton Foundation also didn’t help improve her image. Also, Clinton and her team exhibited an appalling arrogance inherent with coastal, urban-based elites, who view anyone not like them with scorn, disgust, and appalling condescension. That was encapsulated with the campaign’s assumption that the Obama coalition would turn out for Clinton. They didn’t.

Second, with their worldview shattered, their identity politics smashed by an army of peasants, the total losers on Clinton’s campaign, as you’ve read, pointed to the main reason Trump won: racism. These people have learned nothing. They haven’t read the exit polls and they surely didn’t listen to Michael Moore, who predicted Trump winning the election and explained, without going into his own left wing commentary, why the Rust Belt went Trump hardcore. These people have been living in economic disaster for decades and Hillary Clinton didn’t seem interested in them. They felt she cared more about transgendered Americans being allowed to use a public bathroom than jobs. It’s a cornerstone issue for the metropolitan progressive. Rep. Debbie Dingell (D-MI) and local Democratic Party chairpersons in the Rust Belt also gave warning that Trump could do well in the Democratic blue wall. CNN commentator Van Jones may have been moronic to describe 2016 as a white lash, given that the demographics mirrored the 2012 electorate, but he did note that the Left had dumb reasons for why Trump would lose, adding that one of them is the Rust Belt, which is hanging by a thread for Democrats. In the end, Trump utterly destroyed that blue wall, taking Michigan, Pennsylvania, and Wisconsin. Also, did anyone forget that millions of Obama supporters voted for Trump? Moore also disagreed that Trump voters are racist, noting that these Obama flippers also voted for a man whose middle name “Hussein.” It is unadulterated crap to say racism was the reason Trump won. Are we to suggest that Obama voters became vicious racists in four to eight years? I’m not buying it—and neither is anyone who is serious.

The Post added that Clinton received more votes than Trump, which Conway noted is irrelevant; Trump won. And that’s not how our system works. You need to win states, and Trump won the majority of them. Republicans are the dominant political force in the country, while Democrats are a coastal party fraught with snobs.

As many of you already know, I really wasn’t a fan of Trump, but he won the nomination. He won the primary and as a Republican, he was a lot better than Clinton. I guess that makes me a white supremacist, huh? I will say that this meltdown on the left wing Young Turks program when they see Clinton lose to Trump is just comedy gold. In the end, anyone who is serious would say that Clinton lost because she was a terrible candidate with terrible messages. And she ran a positive campaign? Please—how many times did you see the “our children are watching” ad? All of that media spending too and she still lost.

You can’t get what you want, progressives. Welcome to America. Trump won 42 percent of the overall women vote, including 53 percent of white women and 62 percent of working class women. And yes, some of the educated voted for him too. Just own it. Clinton was terrible. Period.

Exit Question: Why did Hillary lose? Have fun and go vote.