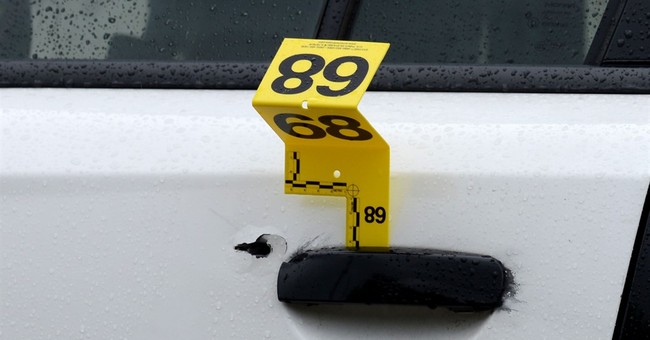 The Associated Press is reporting that a police officer in San Antonio, Texas has been shot and killed while conducting a routine traffic stop. The motive is unknown. The shooter is still at large. The news organization noted that the shooter walked up to the driver’s side window of the officer’s squad car and shot him in the head as he was writing a ticket:

San Antonio police Chief William McManus said the suspect is not known and has not yet been apprehended. A motive is not known.

"This is everyone's worst nightmare," he said.

McManus said the officer had pulled over a vehicle and while he was inside his squad car writing a ticket, a vehicle pulled up behind him. He says the driver of that vehicle got out, walked up to the officer's driver-side window and shot the officer in the head. The man fired a second time, then walked back to his vehicle and drove away, McManus said.

The officer, a 20-year veteran of the force, was pronounced dead at a hospital.

Police say San Antonio officer fatally shot as he wrote a traffic ticket inside his car; suspect at large. https://t.co/8y8U5qrScX