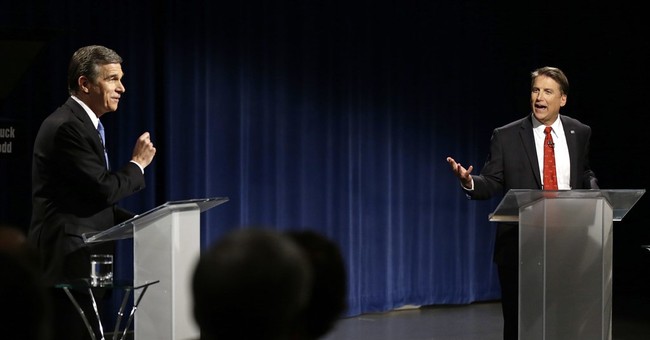 UPDATE: Actually, the state board of elections is having that meeting on Tuesday at 10 a.m. (via ABC11):

The five-member board, three Republicans and two Democrats, debated but didn't grant the request by McCrory's campaign to take over jurisdiction of at least 50 protests covering 35 counties. Most current protests allege some votes shouldn't be counted because the voter died before Election Day, is a convicted felon or voted in multiple locations. At least six protests allege absentee fraud.

The North Carolina State Board of Elections is holding an emergency meeting this afternoon concerning the voter challenges filed by Republican Gov. Pat McCrory. McCrory is fighting for his political life, as the state’s gubernatorial election was too close to declare an outright winner, triggering a recount (via ABC11):

The State Board of Elections will hold an emergency public meeting Sunday afternoon to discuss election protests filed in the North Carolina Governor's race.

McCrory's campaign asked the State B.O.E. Friday to intervene and take jurisdiction over pending protests. McCrory's campaign team asked that protests raising similar issues be consolidated to "prevent inconsistent results among the counties and facilitate a quicker resolution if the issues raised."

There have been allegations of voter fraud and other suspicious activities regarding the counting of ballots. The McCrory campaign has filed challenges in 50 counties, though the Durham County Board of Elections voted unanimously to reject his vote challenge there on Friday.