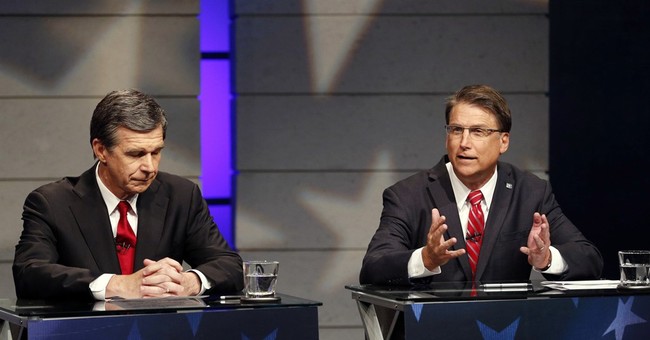 Editor's Note: The headline and post have been tweaked to reflect that a recount wasn't conducted at the time of publishing this post. We apologize for the error.

The North Carolina gubernatorial election between incumbent Republican Gov. Pat McCrory and Attorney General Roy Cooper is tight, with Cooper ahead by 5,000 votes. Many more ballots are to be counted, but the whole process is fraught with controversy. Cortney wrote earlier today that there could be some funny business with the vote counts in Durham and Bladen counties. Now, McCrory’s campaign site said they’ve filed election protests in 11 more counties:

Formal protests are being filed to challenge potentially fraudulent absentee ballots cast for Roy Cooper and other Democrats in 11 additional counties. These protests follow the discovery of a North Carolina Democrat Party-funded political action committee which appears to have paid individuals to fill out and witness hundreds of fraudulent absentee ballots for Democrats including Roy Cooper in Bladen County.

In addition to funneling money to the Bladen County Improvement Association PAC, the North Carolina Democratic Party simultaneously transferred money to political action committees in these 11 counties. Similar absentee voting and handwriting patterns as in Bladen County have been discovered in at least one of these counties, suggesting these PACs may have been harvesting and witnessing multiple absentee ballots as well.

“It appears that our worst fears have come true and this absentee ballot fraud scheme may run deeper than just Bladen County,” said Russell Peck, Pat McCrory’s campaign manager. “Unfortunately, we may also have uncovered the real reason Roy Cooper fought so hard against efforts to prevent voter fraud as attorney general. These voter fraud concerns must be addressed before the results of the election can be finalized.”

We’ll see what happens, but Jazz Shaw wrote that this could be a very long ordeal.