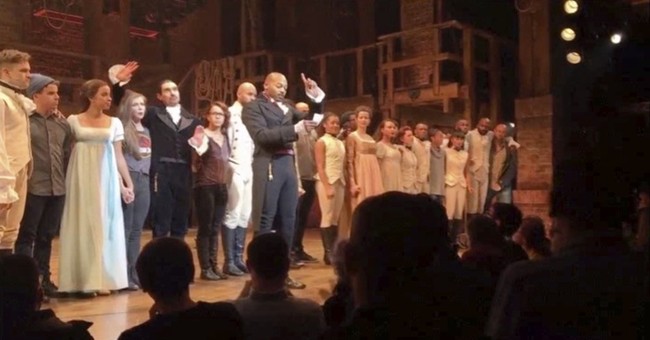 They still don’t get it. They still don’t freaking get it. The metropolitan elites (i.e. snobby liberals) simply cannot grasp the America that exists beyond the highways and the suburbs. The forgotten communities that President-elect Trump resonated in and who had their revenge on November 8 when they loudly shouted that they’re not with her [Clinton]. The working class tossed the table where the establishment of both parties sat and demanded that the agenda for the next four years change. Yet, as liberal America continues to whine about Clinton’s loss, life is going on as normal with many folks. Even Vice President-elect Mike Pence decided to see Broadway’s Hamilton, where the cast proceeded to lecture him during the curtain call. Christine wrote about it earlier this morning, which has set off a firestorm across social media and even into the communities beyond the bastions of progressives.

The night didn’t start well for Mr. Pence. He was booed at the theater, which is typical because this is New York. Everyone is either miserable or rude, which makes it a prime area for liberalism to flourish. Then, came this declaration from Brandon Victor Dixon, who play Aaron Burr in the play (via WaPo):

Vice President-elect Pence, we welcome you, and we truly thank you for joining us here at ‘Hamilton: An American Musical.’ We really do,” Dixon said to further applause. “We, sir, we are the diverse America who are alarmed and anxious that your new administration will not protect us, our planet, our children, our parents, or defend us and uphold our inalienable rights, sir. But we truly hope this show has inspired you to uphold our American values and work on behalf of all of us. All of us. Again, we truly thank you truly for (sharing) this show, this wonderful American story told by a diverse group of men and women of different colors, creeds and orientations.”

When we first got the call that [Pence] was coming, there was certainly a question of what we would do,” Dixon told the site, which covers Broadway news. “These are the opportunities that you die for.”

Dixon added that he saw Pence enjoying the show and hoped the future vice president would remember the cast.

“I truly believe we had an effect,” Dixon told the site. “… If you have differences, say something! What better place than on this stage telling this story with these people? I hope he thinks of us every time he has to deal with an issue or talk about a bill or present anything.”

Trump has called on the Hamilton cast to apologize. I don’t think they need to do that. Pence is a public figure, these folks thought he needed a lecture. But look at the statement and Dixon’s remarks. First, you’d think that some dictator was just elected, which was one of the worst instances of progressive hyperbole on the campaign trail—that Trump/Pence were literally fascists. Oh, and the endless comparisons to Hitler: nonsensical drivel that no one really cared about unless you were dumb, progressive, or lived in San Francisco. Back to Dixon’s statement, it’s crap. You have to be seriously dense to think that this administration is actually going to declare open season on Americans, our own countrymen. Our system of government is designed, unless during periods of war or rebellion, that our government just can’t take actions akin to Latin American dictatorships. Third, liberals will see this as a call to show how great diversity is in this country. Yeah, as a person of color, I get it. Woo hoo! Diversity! Yeah! There hasn’t been a single time that I’ve entered a room with Asians making up the majority of the occupants. To the Left, that can be a problem. I didn’t care. I wasn’t triggered. The room was always made up of Americans. And that’s the difference between progressives and normal people. I see fellow countrymen, all they see is race, but you already know this by now.

The main point that needs to be made about this statement is the geographic connotations. Where is Hamilton being performed? What is Broadway? All of it centered on one theme: the cities, the urban elites—we’re the people who really matter. You’re a Rust Belt governor from a country bumpkin state, who won an election because you got other working class folks behind you—and you can watch and enjoy the show—but this is where real Americans reside and where things actually matter. That's precisely wrong since you guys lost.

As I’ve written and cited before, what drove working class voters to Trump wasn’t race. Even hard-core progressives, like Michael Moore and Jon Stewart, said that this really wasn’t about race since millions of Obama supporters flipped for Trump. It was class. The utter snobbery from folks, who probably packed the halls of Broadway, to watch last night’s performance has been a grating issue between rural and urban, elite and working class, and it so happens that the elite picked a bad candidate, Clinton, to try to continue his agenda. They lost. And now they have to deal with this army of...peasants.

As Jay Caruso wrote over at RedState, the aura of the audience seemed to pretty much resemble that of disgust.

“How dare somebody from America’s heartland take some time to watch a Broadway show! The nerve,” Caruso wrote. Right, Pence isn’t a member of this club. Despite having a Bachelor’s and a law degree, Pence is also a conservative Republican, so tough luck being accepted in any urban environment. Heck, you can be a Nobel laureate, if you trend right, you’re toast with these people, but who cares.

No, I’m not saying to boycott Hamilton or become less engaged in other pursuits. Any person has the right to see a Broadway show or whatever entertainment they choose. I’m just saying that for some people in public life, even regular Joes, your politics can be met with scorn at the venue. Hence, why Broadway and these areas typically reserved for the elite should be crashed whenever possible by conservatives; we’re against safe spaces and they do the same to us. And when the Left says, “all are welcome,” you should enter with the foreknowledge that this could be a trap. After all, the vice president-elect was ambushed. But Pence should be commended for going. For starters, it only emboldened Trump/Pence supporters. Second, even Democrats who live in Trumpland, including those who voted for Hillary, were not happy over this incident.

Some people who claim they are stereotyped and bullied seem to be stereotyping and bullying. But they seem not to see the hypocrisy.

The cast of Hamilton made me want to support Trump/Pence for their stunt last night more than Trump did during his entire campaign.

Just interviewed a bunch of women who voted Hillary, they had the same reaction. https://t.co/bHc4fV8TTi

What happened to @mike_pence at Hamilton last night has resonated already out here on Main Street. Regular Democrats I interviewed appalled

Proud of @HamiltonMusical. Proud of @BrandonVDixon, for leading with love.
And proud to remind you that ALL are welcome at the theater.

Also, as Paul Brian wrote in his op-ed for The Hill, Dixon’s statement seemed a bit holier than thou too:

There was no mention in Dixon’s appeal to left-leaning voters or Hillary Clinton supporters to condemn the kind of violence that sent a 15-year-old Trump supporter to hospital after being beaten at an anti-Trump student rally in Rockville, MD. A man choked and shoved for wearing a Trump hat in New York City. A teen girl attacked at school for expressing support for Trump on social media. And in Brooklyn, a 74-year-old was beaten by an anti-Trump protester.

Humiliating Pence in front of a sold-out crowd of people who already probably mostly disliked and resented him was a low move. So was fashion designer Sophie Theallet’s recent “open letter” expressing pride at having helped dress First Lady Michelle Obama and a refusal to do the same for incoming FLOTUS Melania Trump.

Right, those people were white; they don’t matter, which sort of undercuts the whole point of this exercise here. Everyone matters. Everyone will be protected. Also, the Left failed to persuade voters that Clinton was better than Trump, partially because they didn't feel that everyone mattered. All Dixon did was serve up some left wing red meat to the already heavily progressive audience, so this if he was trying to act brave, it failed miserably. They were echoes from the bubble.