Whoa: Trump Ahead By Three Over Clinton...In Virginia? 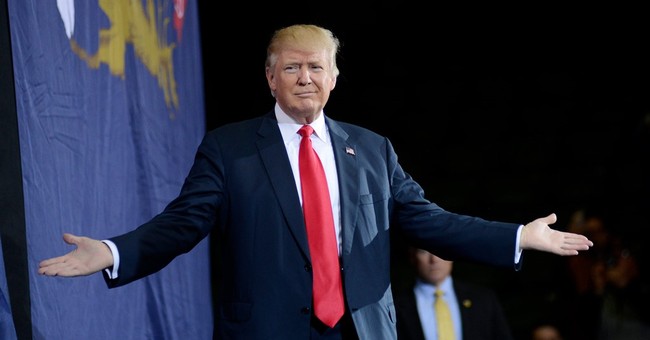 So, here’s some news that’s rather surprising: Donald Trump is leading Hillary Clinton in Virginia by three points, according to the Hampton University Center for Public Policy. Granted, this poll is an outlier (right now), but it did have the former first lady up by a decisive 12 points last month (via CPP):

With only six days left before the November Presidential election, Trump has jumped ahead of Clinton, erasing a 12-point deficit reported by the CPP in early October. This surge for Trump demonstrates again how erratic the run for the White House has been as we head into the final days of Decision 2016. This is the first time Clinton has trailed in the CPP polls this year; the latest poll was conducted Oct. 26-30.

The poll was conducted by the Hampton University Center for Public Policy (CPP) from October 26- 30, 2016 questioning 802 registered voters who said they were “likely” to vote on November 8, 2016 in the Virginia General Election.

The sample size is fine (600 is usually the minimum for a statewide poll), the margin of error is somewhat within the ballpark—but it’s doubtful that Virginia is within play. Just now, Fox News’ Brit Hume and Karl Rove pretty much conceded that Clinton would win the state; the Real Clear Politics average, even with the CPP poll factored in, has Clinton ahead by three points. A Washington Post/Schar School of Policy and Government poll has Lady Macbeth ahead by six:

Hillary Clinton maintains a lead over Donald Trump in Virginia just a week from Election Day, but her six-point margin is far from ironclad, according to a new Washington Post-Schar School poll.

Antipathy toward Trump in the vote-rich counties close to Washington fuels Clinton’s overall advantage in the state, though majorities of voters across Virginia hold unfavorable impressions of both candidates.

The poll, conducted Thursday through Sunday, did not show any immediate drop in Clinton’s support following Friday’s announcement that the FBI was investigating more email that could be relevant to the probe into the former secretary of state’s private email server. In fact, Clinton held her widest advantage in the polling conducted Saturday and Sunday. But that result could be due, in part, to a more demographically diverse sample of voters being reached on those days.

What’s boosting Clinton in Virginia? You guessed it: the liberal bastion that is Northern Virginia. Yet, in terms of the mud slinging, more voters find that Clinton is willing to bend the rules (74 percent) than those who feel that Trump is biased against women and minorities, though that figure was also high at 57 percent. Sixty percent view Trump unfavorably, while Clinton’s unfavorable numbers soar around 57 percent. They’re both deeply unpopular, though it shows that the GOP attacks against Clinton’s character, specifically her penchant for playing by a different set of rules, are resonating with voters. They know she’s a lying, dishonest candidate; the problem is Trump isn’t much better. So, an outlier poll, plus this WaPo poll showing Clinton with a six-point lead—what does the Schar School think? Do they agree with Rove and Hume? No—they feel Virginia is still in play:

Mark Rozell, dean of the Schar School of Policy and Government at George Mason University, said Clinton’s lead does not look commanding when put into historical context.

Rozell noted that polling in recent off-year U.S. Senate and gubernatorial contests has overestimated Democrats’ margin of victory. Three years ago, for instance, Democrat Terry McAuliffe was up by 12 percentage points at this stage of the governor’s race, and he won by only three points, Rozell said.

“Bottom line, Virginia is still in play,” he said.

Donna Hakki, 50, of Glen Allen has voted for Bill Clinton but also for Mitt Romney. Now she’s for Trump. “He’s not a career politician, and I just felt like we needed change,” she said.

With two daughters in college and a son in his last year of high school, Hakki said she feels uncertain about their future and worries about the direction of the country.

She said she isn’t bothered by criticisms that Trump is biased against women or minorities.

“No, he’s created jobs for everyone, and my mother taught me as a child that actions speak louder than words,” she said.

Carolyn Cole, 73, a homemaker in Hanover County outside Richmond, also is accepting of Trump’s controversial behavior.

“Some of that stuff was really old,” Cole said. “I would be the one to say to someone like [former congressman] Anthony Weiner or those in the Senate or in Congress, that you who are without sin cast the first stone. I think that is not an unusual thing. Men can be men.”

Certainly a much better picture than most had projected, especially after the Access Hollywood bomb that sent the GOP into crisis mode. In that episode, Trump was captured making lewd remarks about women in a 2005 tape from the entertainment program. He’s all but recovered from the fallout from those miserable two weeks. Virginia might be in play to some people, though the campaign would do well to stay focused on shoring up support in Ohio, Florida, North Carolina, Nevada, New Hampshire, and maybe Colorado. The road for Trump is still a tough one, but one thing is clear: the race is tightening up, which says a lot more about Clinton's candidacy. She's weak.