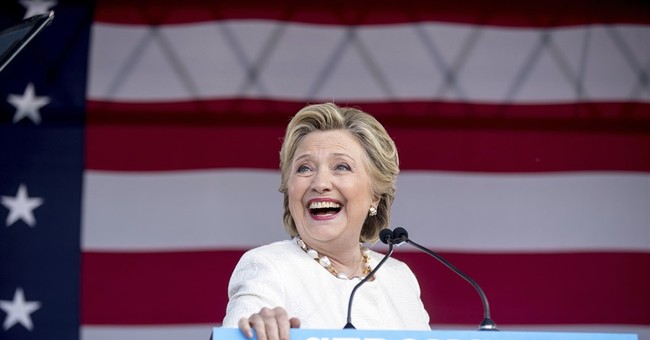 We’re less than a week from Election Day and the FBI is renewing their review of Clinton’s email probe, polls seem to be tightening, and if things keep going as they’re going—this election could be closer than many originally projected. Guy has more on the races here, but two things are clear: 1) Hillary Clinton is extremely unpopular; and 2) Democratic enthusiasm has dropped like a rock since the FBI announced they were looking into more Clinton-related emails sent by top aide Huma Abedin that were found on Anthony Weiner’s, her estranged husband's, laptop. His investigation stems from illicit online communication with an underage girl, which is why the FBI needed to wait on a new warrant before they could review the 650,000 emails that were found. The warrant came in Sunday and the review has begun. Abedin and Weiner shared the laptop in question, but back to the numbers.

I’m sure you already knew that Clinton is unpopular, but her unfavorable numbers have reached 60 percent in a recent Washington Post/ABC News tracking poll, but Donald Trump doesn’t do much better:

Beneath these results is a possible slip in enthusiasm for Clinton. Using just the last two nights' results — after FBI Director James Comey revealed a further Clinton-related email investigation — 47 percent of her supporters say they're very enthusiastic about her, compared with 51 percent across the previous six nights.

And that enthusiasm has dropped even more:

The tracking poll finds little shift in Clinton's overall support following news of the FBI's renewed look at Clinton emails, but strong enthusiasm among her supporters fell behind Trump in combined Saturday and Sunday interviews. By 53 to 43 percent, more Trump supporters say they are "very enthusiastic" about him, compared with Thursday and Friday when Trump's edge was negligible (53 percent vs. 51 percent).

Voter enthusiasm has been in short supply for both Clinton and Trump through the fall campaign and continues to lag excitement about candidates on the ballot four years ago. At this point in 2012, 64 percent of Obama supporters said they were "very enthusiastic" about him; Romney was only narrowly behind at 61 percent.

Trump and Clinton continue to run nearly even in overall vote preferences, with Trump at 46 percent and Clinton 45 percent in a four-way contest in the poll conducted Thursday through Sunday. The margin is a mirror 48-47 Clinton-Trump split when third-party candidates are asked which major-party candidate they lean toward, a comparison that has grown in importance as support declines steadily for Libertarian Gary Johnson and the Green Party's Jill Stein.

That enthusiasm has taken a nosedive for the Democratic nominee, though members of both parties seem to view their respective candidate unfavorably. Turnout seems to be mostly driven the hatred each side feels for the other’s candidate. Moreover, the WaPo poll found that Clinton is more than a few touchdowns ahead of Trump on the early voting front 54/41, but trails him with those who plan to vote on Election Day 50/39. NBC News’ Chuck Todd asked if Clinton could win back some of the supporter she lost to third party supporters back in September. At that time, Libertarian Gary Johnson broke into the double-digits, but that’s collapsed as we’ve approached closer to Election Day. For a time it seems as if Clinton might be clawing her way back with this slice of voters, but as the WaPo poll shows, they’re pretty much evenly split between Trump and Clinton if they had to choose between the two. Historically, third party support evaporates as more people decide to come home to either of the major parties when entering the voting booth. Still a lot can happen, but things aren’t looking as apocalyptic for Mr. Trump. Keep in mind his habit of being undisciplined and tweet insane musings, this could all easily go off the rails within a couple of days.