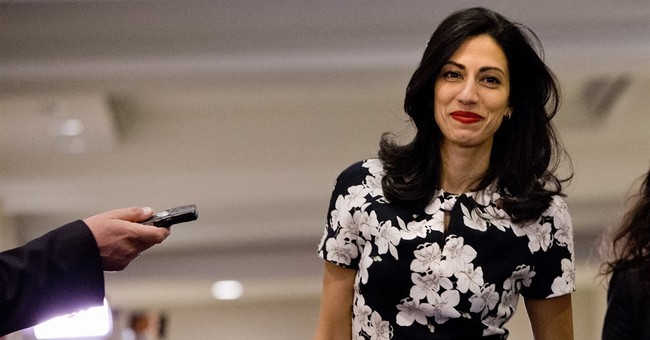 Editors Note: Headline has been changed to reflect changes in the story.

Justice Department and FBI are still seeking approval to review the new Clinton-related emails on Anthony Weiner's laptop with the lawyers representing top Clinton aide Huma Abedin. Abedin shared that device with her estranged husband, who is under investigation for an online interaction he had with an underage girl. During that probe, an examination of the laptop led to the discovery of the emails. They have not been reviewed, even when FBI Director Comey sent a letter to Congress informing them that these emails were related to the Clinton email investigation that he concluded in July. Katie wrote earlier today that the FBI and the DOJ were still talking about securing a warrant to review the emails.

Speculation is boundless at this point, but it appears that Abedin could land in legal trouble since she delivered remarks in a June deposition about having turned over all devices with State Department emails. It related to Judicial Watch’s lawsuit over Clinton’s email server. Also, in February of 2013, when Clinton left the State Department, Abedin signed a routine form indicating that all classified, government-related, even administrative emails and correspondences would be turned over upon leaving her position there. Both instances carried the penalty of perjury.