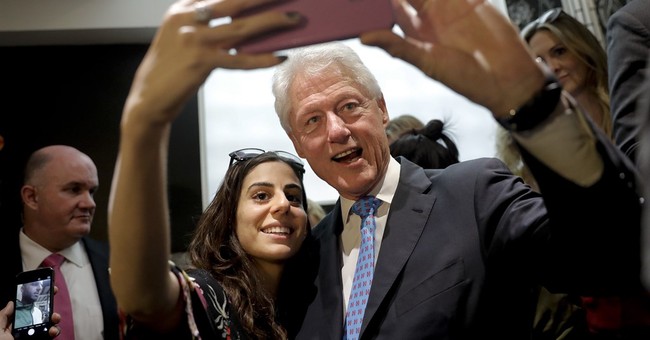 MF Global, an investment firm, was rendered defunct in 2011 and drew the attention of Congress when it misappropriated $1.2 billion. Its former CEO, Jon Corzine, said he didn’t know what happened to the money. Given the stigma concerning financial institution from the 2008 crisis, Chelsea seemed worried about these ties, which drew her into conflict with Band. In fact, Wikileaks provided the emails that showed both Bill and Chelsea’s “office crap” drove one of the Foundation executives, former chief operating officer Laura Graham, was almost driven to suicide; Band called her a “spoiled brat.”

Regardless, this memo is an insight into the culture of money and access that surrounds the power couple (via WaPo):

The memo, made public Wednesday by the anti-secrecy group WikiLeaks, lays out the aggressive strategy behind lining up the consulting contracts and paid speaking engagements for Bill Clinton that added tens of millions of dollars to the family’s fortune, including during the years that Hillary Clinton led the State Department. It describes how Band helped run what he called “Bill Clinton Inc.,” obtaining “in-kind services for the President and his family — for personal travel, hospitality, vacation and the like.”

Band wrote that Teneo partners had raised in excess of $8 million for the foundation and $3 million in paid speaking fees for Bill Clinton. He said he had secured contracts for the former president that would pay out $66 million over the subsequent nine years if the deals remained in place.

For instance, Band wrote that Kelly arranged for the former president to meet the chief executive of Coca-Cola in January 2009 at the Clintons’ home in Washington. In all, according to Band’s memo, Coke had contributed $4.33 million to the foundation between 2004 and 2010.

Band also described how Kelly helped expand a fruitful relationship with UBS Global Wealth Management, introducing Bill Clinton to a top executive at a 2009 charity dinner. In the ensuing years, UBS upped its giving to the foundation, signed on as a Teneo client and agreed to pay Bill Clinton for speeches, Band wrote.

Records show UBS paid Clinton about $2 million in speaking fees between 2011 and 2015 for a series of appearances, generally alongside former president George W. Bush. The company also paid Hillary Clinton $225,000 for a 2013 speech.

Clinton has credited Band with conceiving of the Clinton Global Initiative, the glitzy annual meeting where corporate, government and nonprofit leaders gathered annually to talk about the world’s problems. Started in 2005, CGI became the best-known arm of the Clinton Foundation, which also operated education, environmental and health programs around the world. The final CGI meeting took place last month.

By 2011, the longtime Clinton aide was ready to strike out on his own.

That’s when Band and Kelly joined forces to form Teneo. At first, the firm remained closely linked to the Clinton network.

Band described in the memo how he combined his work for CGI and Teneo. He wrote that he had used a hotel room upstairs from the 2011 CGI gathering to meet with Teneo clients. He also acknowledged giving free CGI memberships to “target Teneo clients” being cultivated as potential foundation donors. Memberships generally cost $20,000 a year.

The Post added that Clinton cut ties with Teneo and a more solid wall of separation was built between Bill and the Foundation concerning nonprofit and private endeavors. Yet, the fact remains that the wealthy and well-connected may be paying Teneo for access to the Clintons, especially the head of Dow Chemical, one of Band’s first clients.

NBC’s Chuck Todd on why Hillary Clinton’s campaign will have to comment on this development:

What the memo makes clear is how inseparable the Clinton Foundation was to business interests. And while the Clinton campaign has refused to acknowledge the authenticity of the previous WikiLeaks emails, the company that Band co-founded -- Teneo -- did confirm the memo. And that puts extra pressure on Clinton and her campaign to speak out.

We’ll see what happens. If anything, it just shows how if these folks get into the White House, it could become a hotbed of corruption.