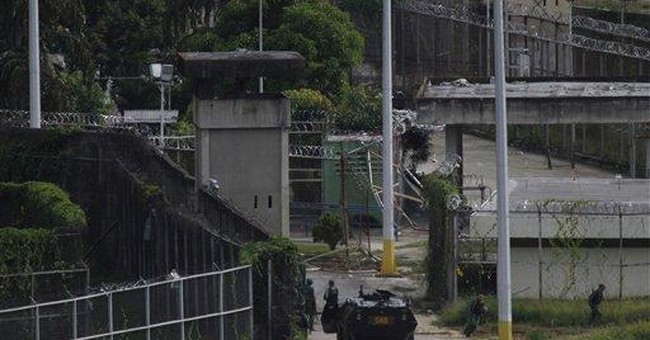 Venezuela’s socioeconomic fabric has come undone. With Venezuelans suffering from deplorable conditions, including lack of food, medical supplies, electricity, and other basic items, imagine how prison system is faring as the state deteriorates. For starters, there are grisly reports of inmates being eaten. That appears to be what has occurred at Táchira Detention Center, which ended a one-month standoff by inmates who were demanding prisoner transfers to other jails to escape overcrowding. According to the father of a victim, a law enforcement source, and someone who works in the penal system in the country, a) stories of cannibalism in overcrowded prisons isn’t new; and b) it happened (via Fox News Latino):

Juan Carlos Herrera is beyond devastated. He says his 25-year-old-son, jailed in 2015 for robbery, was beaten, dismembered and eaten by fellow inmates at the Táchira Detention Center.

The shocking claim became public on Oct. 10, when Herrera told the local media he made the gruesome discovery during a regular prison visit.

“One of those who were with him when he was murdered saw everything that happened,” Herrera told reporters. “My son and two others were taken by 40 people, stabbed, hanged to bleed, and then Dorancel butchered them to feed all detainees,” he added, referring to infamous inmate Dorancel “people-eater” Vargas, who is in prison since 1999 for cannibalism.

“The [inmate] with whom I spoke to told me that he was beaten with a hammer [in order] to force him to eat the remains of the two boys,” Herrera added tearfully.

A police source who asked to remain anonymous told Fox News Latino the claims of murder and cannibalism are true. “Two [inmates] are missing. They cut them up and fed them to several [of the fellow inmates], they made the bones disappear. Dorancel cut the flesh,” the source said.

On Thursday night, the Minister of Correctional Affairs Iris Varela confirmed the disappearance but denied the cannibalism allegations. She said while she “understands the father’s pain,” she regretted that he’s being used to channel lies that can be “easily debunked.”

Humberto Prado, coordinator of the Venezuelan Prison Observatory (OVP) said the alleged atrocity would be nothing new in the country’s convulsed prisons.

If true, this is absolutely ghastly