Of Course, Facebook Had An Internal Debate About Banning Trump’s Posts 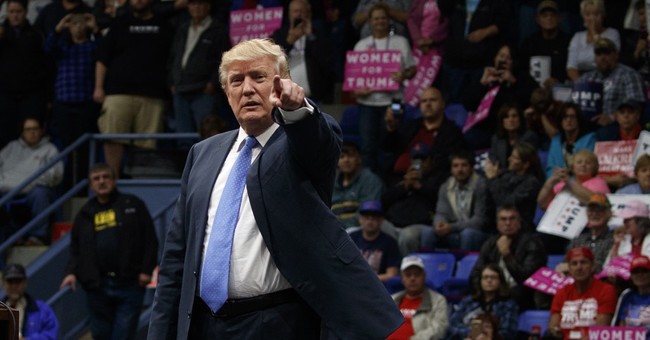 Remember when Donald Trump wanted a total and complete shutdown of Muslim immigration into the United States. Well, of course, the social justice warriors at Facebook too deep, deep offense to that, setting of an internal debate whether to ban the presidential nominee’s posts from the social media network over violations of its terms of service (i.e. hate speech). The site’s director, Peter Thiel, pledging $1.25 million effort to elect the billionaire president, exacerbated the tension on this matter between Trump and Facebook, according to The Wall Street Journal. The platform recently said “In the weeks ahead, we’re going to begin allowing more items that people find newsworthy, significant, or important to the public interest—even if they might otherwise violate our standards.” Yet, all of this talk about content, free speech, censorship, and Trump began with those December 2015 remarks about banning Muslims, which was a reaction to the horrific terrorist attack in San Bernardino:

Issues around Mr. Trump’s posts emerged when he posted on Facebook a link to a Dec. 7 campaign statement “on preventing Muslim immigration.” The statement called for “a total and complete shutdown of Muslims entering the United States until our country’s representatives can figure out what is going on.” Mr. Trump has since backed away from an outright ban based on religion, saying his policies would target immigrants from countries with a record of terrorism.

Users flagged the December content as hate speech, a move that triggered a review by Facebook’s community-operations team, with hundreds of employees in several offices world-wide. Some Facebook employees said in internal chat rooms that the post broke Facebook’s rules on hate speech as detailed in its internal guidelines, according to people familiar with the matter.

Content reviewers were asked by their managers not to remove the post, according to some of the people familiar. Facebook’s head of global policy management, Monika Bickert, later explained in an internal post that the company wouldn’t take down any of Mr. Trump’s posts because it strives to be impartial in the election season, according to people who saw the post.

During one of Mr. Zuckerberg’s weekly town hall meetings in late January at the company’s Menlo Park, Calif., headquarters, a Muslim employee asked how the executive could condone Mr. Trump’s comments. Mr. Zuckerberg acknowledged that Mr. Trump’s call for a ban did qualify as hate speech, but said the implications of removing them were too drastic, according to two people who attended the meeting. Mr. Zuckerberg said he backed Ms. Bickert’s call, they said.

Many employees supported the decision. “Banning a U.S. presidential candidate is not something you do lightly,” said one person familiar with the decision.

But others, including some Muslim employees at Facebook, were upset that the platform would make an exception. In Dublin, where many of Facebook’s content reviewers work, more than a dozen Muslim employees met with their managers to discuss the policy, according to another person familiar with the matter. Some created internal Facebook groups protesting the decision, while others threatened to leave.

In the end, these folks lost—and the decision by Zuckerberg was final. Facebook doesn’t get good marks from conservatives, given that Zuckerberg has voiced his support for some of Obama’s controversial policies, like rewriting federal immigration laws via executive order, and he’s from Silicon Valley; a techno-centric mecca that’s chock full of progressive lefties. Yet, you have to give credit where credit is due: he held firm against what was probably an intense internal debate over whether to ban a presidential candidate from posting material. On the other hand, the site is expected to reap $300 million from online political advertising this cycle, so that might have something to do with it as well. Nevertheless, whether it was the aspect of losing revenue, allowing the site to share both liberal and conservative views from either candidates, or a mixture of the two, I guess we can say that Zuckerberg made the right call. After all, hate speech criteria is usually social justice warrior drivel, in which any speech that offends them is considered something akin to a Nazi rally. The Journal did note, as did many publications at the time, that Trump would only restrict immigration from countries with ties to terrorism, which isn’t controversial. In fact, it might be a popular proposal with the spike in terrorism attacks, especially from ISIS.

At the end, Facebook is a business. It takes pride in being a platform where news is shared, money can be raised, and people can connect. During that December month, which was preceded by ISIS killed over 100 French citizens in Paris, there was a concern about Syrian refugees being infiltrated by terrorists, there was no way to screen all of those (10,000 in all for now) coming here regarding possible ties to terrorism. It was a huge issue, which the Republicans took seriously while the Democrats mocked them; a sign that this party shouldn’t be taken seriously on national security. Is a Muslim ban outrageous? Yes. It is hate speech? Hardly. If a pro-lifer called a pro-choice activist a baby killer (there are better ways to convey defense of the unborn), I would say that’s a bit over the top, like the Muslim ban, but hardly what is actual hate speech.

I use the pro-life position as an example since there are multiple instances where those activists are viewed as spreading hate speech. Folks, even pro-Trump chalkings are considered hate speech. It’s absurd and again the Left’s notion of such despicable speech should always be subject to extreme scrutiny. In the end, it’s usually a blanket attempt to ban opinions they disagree with.

What Trump says is controversial. It’s provocative, but it’s nowhere near the language used in Klan rallies, which is the purest form of hate speech in America. Moreover, the fight to ban so-called hate speech has led to the deplorable phenomena known as safe spaces, speech codes, and triggering. In some cases, it’s led to our history being targeted for the sake of not making soft, weak liberal students uncomfortable.

Also, banning the GOP nominee from posting because you disagree with him…c’mon. There are a lot of despicable opinions out there folks. Some are blatantly racist; others merely fall within the realm of being a conservative, like being pro-life, which isn’t racist. The trick is to tolerate those terrible opinions, while having the will to simply walk away from someone spewing racist filth. You can counter protest those folks too, you know. There are many ways to fight true hate speech without taking those censorship steroids that's become a terrible addiction for the Left.