Wikileaks: Clinton Campaign Thought Benghazi Was “Good” For Them, Debated Levels Of Support For Israel 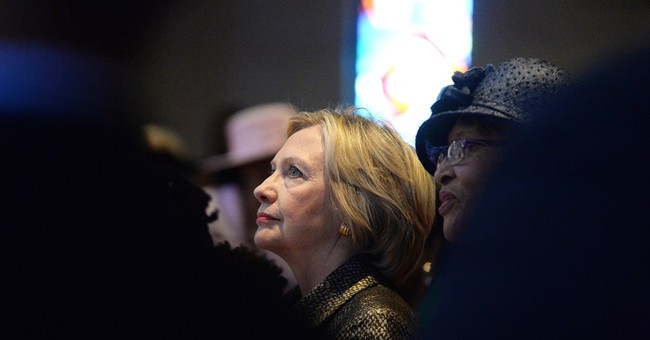 The latest batch of John Podesta emails from Wikileaks shows how a few things: a) they thought the email server fiasco wasn’t going to be a long term story; b) they thought Republicans talking about Benghazi was “good” for them; and c) it shows an internal debate within the Clinton campaign over how much they should support Israel. They didn’t want to anger the progressive, virulently anti-Israel wing of the party. Andrew Stiles of Heat Street reported on the exchange between Podesta, Clinton’s campaign chairman, and Center for American Progress’ Neera Tanden last March when The New York Times exposed Clinton’s unsecure unauthorized email server.

“I don't know how the story advances. So that's good,” wrote Tanden.

“They will go after the server but that takes us back to Benghazi which is good for us,” replied Podesta

The brief exchange ends with Tanden writing, “I mean, they will go after the deleting of the private emails...but at some point, this just will have to run out of steam, especially as they see minimal electoral consequence.”

We all know this was a huge mistake. The emails were a big deal; it did sink Clinton’s trust and honesty numbers with voters to abysmal levels; and it’s been a major handicap on her campaign throughout this entire cycle. If it weren’t for Donald Trump egregious unforced campaign trip-ups, this race could still be a dead heat. She’s that terrible of a candidate.

Still, the whole notion that Benghazi is a great media shield for the Clinton crew is a bit unseemly, feeding into the infamous “what difference does it make” declaration Clinton delivered at a hearing over the 2012 terrorist attack that claimed the life of Ambassador Chris Stevens and three other Americans.

Fox News’ Ed Henry added that Podesta and other aides were coaching Hillary on how to maximize moral outrage when she appeared before the House to answer questions about Benghazi and her email server last October. There was also a discussion on how much support they should publicly declare for the State of Israel, as there was some fear of blowback from the anti-Israel wing of the Democratic Party:

We see an email exchange among John Podesta [and] other top aides, where Hillary Clinton was being coached on, in their words, 'how to stir up some moral outrage against Republicans' at this Benghazi hearing several months ago," Henry reported.

The leaked emails also show Clinton aides debating early in her campaign how strongly she should voice her support for Israel.

He said that Israel debate underscores the main issue with the Democratic nominee: "You're seeing two different Hillary Clintons."

"You're seeing one in public, on Israel, example, saying 'strong ally of Israel,' 'be there for Israel,' 'I'll do whatever I can' in her speeches," Henry said. "And then in private, they're saying, 'Well, wait a second, let's not be too strong of an ally publicly. That's going to hurt us with the left.'"

Henry also brought up Qatar’s $1 million check to the Clinton Foundation, which Bill Clinton accepted on his birthday, while other emails show Hillary pointing to the country as a supporter and financial backer of the Islamic State.