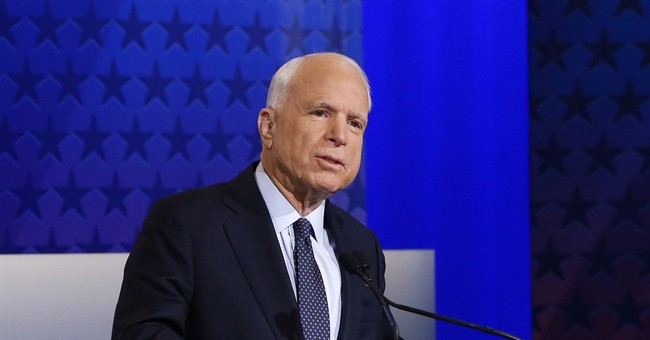 Well, that was fast. Sen. John McCain (R-AZ) isn’t going to stand as firm against a Clinton Supreme Court nominee. So, the Arizona GOP and the conservative wing of the Republican Party can chalk this one up as another instance where the upper chamber’s maverick decided to bolt. McCain promised a united Republican front against any Supreme Court nominee. And it took less than two days for the Arizona Republican to backtrack (via The Hill):

Rachael Dean, a spokeswoman for the GOP senator, said that while McCain "believes you can only judge people by their record" and the Democratic presidential nominee "has a clear record of supporting liberal judicial nominees,” the Arizona senator would consider any Supreme Court pick sent to the chamber.

"Senator McCain will, of course, thoroughly examine the record of any Supreme Court nominee put before the Senate and vote for or against that individual based on their qualifications as he has done throughout his career," she said.

The pivot comes hours after McCain pledged that Senate Republicans would unite against any Supreme Court nominee that a hypothetical President Clinton would try to get confirmed.

"I promise you that we will, we will be united against any Supreme Court nominee that Hillary Clinton — if she were president — would put up," the Arizona Republican told a Philadelphia radio station on Monday. "This is why we need the majority."

How do we read this? Was this McCain going off script, where he should have said what his spokesperson just dished out to the press? Because that statement sounds a lot more like the John McCain we're all accustomed to, whether you like him or not. Being a senior Republican, does this signal that the GOP is going to play ball with a Clinton White House? Sen. Bill Cassidy (R-LA) seems to have already waved the white flag of surrender, saying that Hillary is going to win, and that he would work with whoever is president.

The silver lining is that should the Democrats win the majority, it’ll only be because Tim Kaine gives them that one-seat edge as the vice president, and he can only vote on a tie. Right now, we’re possibly looking at a 50-50 chamber in which Clinton will have zero room to nominate a crazy left wing loon to the Supreme Court. Does she really want to waste the 10¢ in political capital that she will have should she win in November on a judicial fight she can’t win? No way a pro-abortion, anti-gun zealot gets 60 votes for cloture, plus she has her $1.4 trillion in tax increases to dole out. A not so far-fetched scenario is that Clinton sticks with Obama’s nominee, Merrick Garland, who appears to be middle of the road, though I don’t trust him on gun rights. Another option in which Clinton could really place pressure on Senate Republicans to move is to nominate Sri Srinivasan. The current judge for the D.C. Circuit Court of Appeals was confirmed by a 97-0 vote. Sens. Orrin Hatch (R-UT), Mitch McConnell (R-KY), Chuck Grassley (R-IA), and Ted Cruz (R-TX) gave him the stamp of approval. He’s already been vetted. Upon his confirmation hearing, Cruz said, “We have been friends for a long time – so I am hopeful that our friendship will not be seen as a strike against you by some,” which Roll Call reported drew laughter from the audience. Why oppose this guy? Hell, even Ted Cruz likes him. The issue here isn’t so much on the Right, it’s from the Left. Clinton will be pressured by her side to pick a solid hard core liberal, which will be out of the question in a split chamber.

Still, McCain’s retreat just sends the same smoke signals to the conservative wing of the Republican base that Senate Republicans will melt as well. Mr. Maverick didn’t help dispel those assumptions with this walk back.