FBI Agents: Comey ‘Stood In The Way,’ A Grand Jury Should Have Been Convened Over Clinton Email Fiasco 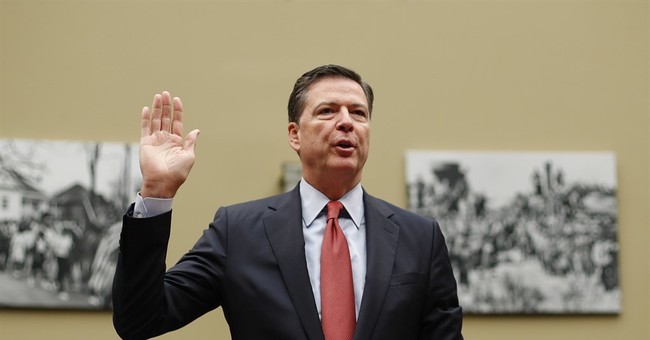 FBI Director James Comey probably knew that he was about to open Pandora’s box when he decided not to file charges against Hillary Clinton’s unauthorized and unsecure email server. The blowback was certainly strong from the pundits and conservatives. Yet, there seems to be a lot of frustration, dismay, and even disgust allegedly coming from within the J. Edgar Hoover Building.

A high-ranking source from within the agency told Fox News that agents involved in the Hillary email investigation were sickened by the decision to let her skate free of any accountability. The source said it was pretty unanimous among the agents that Clinton should have lost her security clearance, and that a majority felt she should be prosecuted. Over the weekend, former U.S. Attorney Joseph diGenova said that Comey is viewed as a “dirty cop,” noting that there appears to be an internal revolt against his leadership.

Now, we have two more agents coming forward saying that a grand jury should have been convened, and that Comey simply “stood in the way” of that. One thing that was odd about the investigation was that the FBI didn’t search Clinton’s house. Moreover, these agents were agitated that Comey kept referring to the Bureau (i.e. we) for discussing why no charged were filed, adding that he was never a special agent or an investigator in his legal career. Kerry Picket of The Daily Caller had more:

This is a textbook case where a grand jury should have convened but was not. That is appalling,” an FBI special agent who has worked public corruption and criminal cases said of the decision. “We talk about it in the office and don’t know how Comey can keep going.”

The agent was also surprised that the bureau did not bother to search Clinton’s house during the investigation.

We didn’t search their house. We always search the house. The search should not just have been for private electronics, which contained classified material, but even for printouts of such material,” he said.

“There should have been a complete search of their residence,” the agent pointed out. “That the FBI did not seize devices is unbelievable. The FBI even seizes devices that have been set on fire.”

He added, “The idea that [the Clinton/e-mail case] didn’t go to a grand jury is ridiculous.”

Concerning Comey’s legal career, Picket did mention that he was a law clerk at for a district court judge in Manhattan, before becoming a law associate at a law firm, a U.S. Attorney, the Deputy Attorney General of the united States, and finally the director of the FBI.

DiGenova was interviewed by Larry O’Connor on WMAL, who told him “They [FBI agents] have no confidence in him. The bureau, inside, right now… is a mess.” there’s always been allegations that a secret deal was struck between the Attorney General Loretta Lynch and former President Bill Clinton, who allegedly delayed takeoff in Phoenix in order to have a run-in with Lynch—who then spoke to the former president on her private plane for about 30 minutes days before Comey delivered his press conference on the findings of the investigation that ended with no charges being brought against Hillary Clinton.

Now, we have verbatim the words “quid pro quo” in the latest batch of FBI notes into the email investigation, where Under Secretary of State For Management State Patrick Kennedy was reportedly trying to declassify scores of emails the FBI had deemed contained classified information. Kennedy suggested that more agents could be placed in nations designated as forbidden should the agency go through with this proposal. Both State and the FBI have denied the allegations.