Minnesota's Democratic Governor Throws In The Towel, Admits Obamacare Is Not Affordable 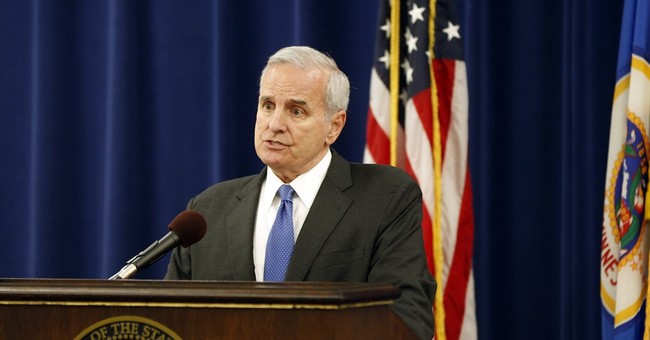 Well, it seems Minnesota Democratic Gov. Mark Dayton has thrown in the towel defending President Obama’s health care law, calling the Affordable Care Act (aka Obamacare) unaffordable. As Guy has written extensively for Townhall, Dayton’s remarks comes after he saw that the premiums for individual plans in his state are projected to spike by double-digits (via Associated Press):

Minnesota's Democratic governor said Wednesday that the Affordable Care Act is "no longer affordable," a stinging critique from a state leader who strongly embraced the law just a few years ago.

Few states embraced the health care law stronger than Minnesota under Dayton, where lawmakers created a state-run online market exchange for shoppers who aren't covered by employers or public programs to buy individual coverage. When those policies first went on sale in 2013, Dayton and state officials proudly touted the lowest health insurance rates in the nation.

But after several years of steadily increasing premiums, top state regulators said this fall that Minnesota's individual market is in "a state of emergency." The state scrambled to stop all seven companies that sell insurance directly to consumers or through the state exchange, MNsure, from fleeing for 2017, but the state's largest insurer is still exiting.

Health care insurance shoppers will see premium increases that range from 50 percent to 67 percent on their plans for next year.

The rising costs and the massive losses health insurance companies have incurred by participating in this doomed market have many fleeing for the hills. Aetna, Humana, UnitedHealth, and Blue Cross are some of the titans who have decided to begin a phased withdrawal from markets. In fact, the law could be on the verge of total collapse by the end of this year.

Regarding Obamacare co-ops, which the Daily Signal aptly described as “consumer operated and oriented plans” meant “to boost competition among insurers and expand the number of health insurance companies available to consumers living in rural areas.” Well, it didn’t work. With the recent collapse of New Jersey’s co-op, only six remain out of the original 23. The entire network is on the precipice of disaster.

The pressure on Obamacare was taken to a new level when former President Bill Clinton called it the “craziest thing in the world,” adding that he would prefer a public option where people 55 and older can buy into Medicare and Medicaid at an affordable rate, whatever that may be.