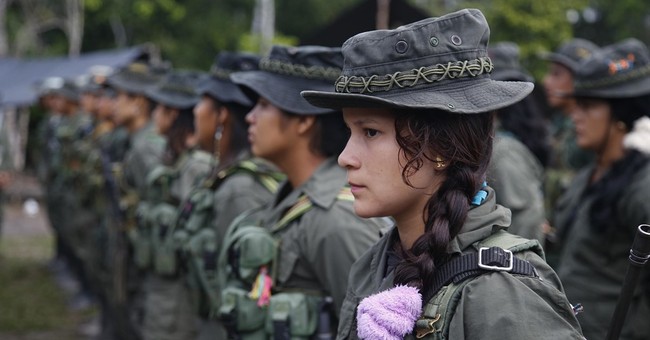 Colombians reject a landmark peace deal with Farc rebels in a shock referendum result, with 50.24% voting against https://t.co/PTVcVYOIcQ

There is uncertainty in Bogota, Colombia, as voters rejected the government’s proposed peace agreement with the Revolutionary Armed Forces of Colombia (FARC). With 99 percent of polling precincts reporting, the “No” vote leads by a 63,000-vote margin. The Washington Post reported that the rejection of the peace deal is a blow to Colombian President Juan Manuel Santos. It also revealed the deep level of distrust voters have for the Marxist rebel group that has engulfed the country in civil war for over five decades. The negotiation process for this agreement took six years to complete. If the agreement had been approved, FARC would’ve disbanded their armed wing and become a political party within the country (via WaPo):

By a razor margin of 50.25 to 49.75 percent, voters rejected the peace deal, a Brexit-style backlash that few were expecting.

After nearly six years of negotiations, many handshakes and ceremonial signatures, Colombia's half-century war is not over. Not even close.

Sunday's vote was also an extraordinary rejection of the guerrilla commanders of the FARC, who in recent months have tried to engineer a makeover of the rebels' public image in preparation for an eventual return to politics. The outcome reveals the depths of Colombian public animosity toward the rebels, accumulated by decades of kidnappings, bombing and land seizures in the name of Marxist-Leninist revolution.

Sunday's vote, for many Colombians, was about far more than a cease-fire with FARC, or Revolutionary Armed Forces of Colombia. Many saw the country's political and judicial integrity at stake, and the peace accord as a dubious giveaway to the rebels.

The Post added that even the current ceasefire between the government is in doubt. It seems that it may take more than a few years to mend the scars of a 50+-year civil war.