Tulsa: Police Officer Says Terence Crutcher Was ‘On Something,’ Ignored Commands To Stop Moving Towards Vehicle 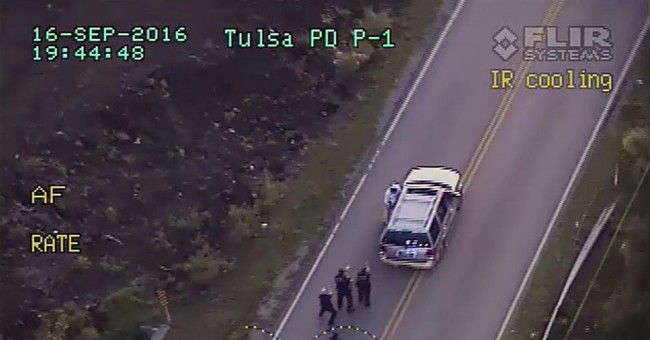 UPDATE: Officer Betty Shelby has been charged with first-degree manslaughter.

Tulsa police officer Betty Shelby, who shot and killed 40-year-old Terence Crutcher last Friday, has given her side of the story, stating that Crutcher was “on something” when she encountered his stalled SUV on the road while responding to a different domestic violence incident. She was alone with him for about 90 seconds, where she says he was mumbling things, ignoring commands, and fired on him when she felt that he was armed and her life was in danger. The story goes that Crutcher was reaching inside the vehicle, though enhanced footage paints a different picture, as a blood streak appears—that could only occur if the window was rolled up. Still, Crutcher ignored commands and walked towards his vehicle, which led to him being tragically shot by Shelby. Again, the Dinkheller incident explains why this could happen to someone who isn't complying with law enforcement. The Justice Department is now investigating the case.

Officer Shelby is also a drug recognition expert and felt that Crutcher was possibly on PCP, which was found in his car upon further investigation. Scott Wood, Shelby’s attorney, recapped the story (via ABC News)

Crutcher didn't respond, simply dropping his head while continuing to look at Shelby, "kind of under his brow," Wood said. Crutcher then began to put his hand into his left pocket, Wood said, adding that Shelby told Crutcher, "Hey, please keep your hands out of your pocket while you're talking to me. Let's deal with his car."

Crutcher did not respond, Wood said, so Shelby ordered him again to get his hand out of his pocket. He then pulled his hand away and put his hands up in the air, even though he was not instructed to do so, which Shelby found strange, Wood said.

Shelby tried to get Crutcher to talk to her, but he simply mumbled something unintelligible and stared at her, Wood said. He then turned and walked to the edge of the roadway and turned to look at her, his hands still in the air, Wood said. He put his hands down and started to reach into his pocket again, Wood said, and she ordered him again to get his hands out of his pocket.

At this point, Shelby, a drug recognition expert, believed Crutcher was "on something," Wood said, possibly PCP.

Shelby then radioed in that she had a subject "who is not following commands."

Shelby ordered Crutcher to stop multiple times as Crutcher walked toward the SUV with his hands up, Wood said.

As a police officer, you have to wonder — why would someone ignore commands at gunpoint to get to a certain location?" Wood said.

Crutcher's arms came down, and he turned to face the car, Wood said, and he reached into the driver's side window with his left hand. That's when Shelby fired one shot and a fellow officer, Tyler Turnbough, deployed a Taser, Wood said.

Again, whether or not Crutcher’s car window was up or down will be revealed in due time. Yet, the fact that he was possibly under the influence and ignored commands to stop moving towards his car is enough for an officer to feel that the situation is unsafe. As I wrote previously, there’s a very good reason why cops don’t allow people to return to their vehicles if stopped and approached by law enforcement: they have no idea what’s inside your car, and sometimes it could be a gun. This was graphically and tragically captured when Andrew Brannan murdered 22-year-old Deputy Sheriff Kyle Dinkheller of the Laurens Country, Georgia in 1998. Brannan ignored Dinkheller’s commands, was able to get back to his vehicle, and kill him with a M1 Carbine rifle. It was all captured on Dinkheller’s dashcam and it’s brutal to watch.

As for those who are on PCP, the subject considers himself or herself impervious to pain, and often doesn’t feel much as a result. Here’s a 2015 incident at a McDonald’s in Maryland, where Marcus Moycherielli was captured being virtually unstoppable as two police officers tried to take him into custody (via WaPo):

When officers arrived, the found the man’s behavior was “consistent with an individual who was under the influence of PCP,” said Police Chief David Morris.

The first officer to arrive at the scene told the man to get on the ground, according to Morris. The man did not comply and continued to argue with an imaginary individual, Morris said.

When a second officer arrived, he entered the restaurant from the other side and came up unexpectedly behind the man, knocking him to the ground, authorities said.

Because the Taser probes were still in the man, the officers could not touch him, Morris said.

“They didn’t want to engage in a wrestling match because of the Taser probes, and that would have placed their weapons in close proximity,” Morris said.

“Normally, someone would drop to their knees,” Morris said, after a person is subjected to a Taser. But in this case, he said, “the Taser had no effect.”

“The Taser was ineffective because the individual was high on PCP and oblivious to pain,” Morris said.

Now, was Crutcher on PCP? We don’t know. The toxicology report won’t be released for a few weeks. I’m not saying that he was asking for it. This is a tragic incident, but the fact that he could’ve been on something and ignored commands from police while walking back towards his car probably made Shelby fear for her life, especially with the Dinkheller incident. That video and scores of others capturing officers being killed in the line of duty are shown at police academies across the country. The lesson is simple: you can't give anyone you encounter the benefit of the doubt (via Slate):

The Dinkheller footage, for instance, is often used to illustrate the importance of not giving a suspect the benefit of the doubt when he is ignoring orders and acting in a clearly threatening manner.

“There were multiple times when he would have been justified in using deadly force against that individual with the rifle, and he either hesitated or chose not to do it,” said Dave Grossi, a former lieutenant in upstate New York who spent 12 years teaching at Calibre Press, a leading private law enforcement training program based in Illinois. The key in presenting something like the Dinkheller video to students, Grossi said, is making sure they understand how the officer who perished could have avoided his fate.

Peter Segreti, a retired NYPD detective who leads tactical training sessions at police agencies around the country, told me that he has shown the Dinkheller video to drive home the point that, as a police officer, you can’t count on everyone you encounter in the street to be a rational and benevolent person.

It goes without saying, being a police officer is a difficult and dangerous job. We’re bound to discover more details about this case. We’ll keep you updated.