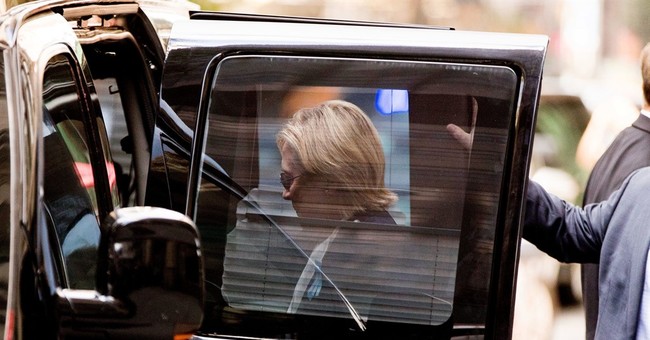 Remember when CNN’s Wolf Blitzer asked Clinton spokesperson Brian Fallon if the pneumonia diagnosis would’ve been released to the public if a video of her stumbling off the curb as her motorcade pulled up wasn’t seen? The former first lady had a medical episode at the 9/11 Memorial on Sunday, which was due to dehydration and overheating. It was later found out that she had pneumonia, which was only released after the rather dismal news day for the campaign. I’m skeptical about Fallon’s answer, where he told Blitzer that disclosure would’ve happened since everyone saw the former secretary of state leave earlier than expected. I’m skeptical of this assessment, especially the track record of this campaign being anything but forthwith about the release of information.

Clinton spokesman on pneumonia diagnosis: “We should have provided more information” https://t.co/lZXnSVNmBP https://t.co/g7IPKg05zD

Well, as soon as her security protective detail got a staggering Clinton into the van, they were bound to head for a hospital, but diverted to Chelsea Clinton's apartment to avoid the possibility that her medical condition would be leaked to the media, who at the time were still trying to figure out what was going on with the former first lady. Fallon noted that Clinton was cogent, alert, and was making phone calls in the van. All was well (via NY Post)

Hillary Clinton was headed to an emergency room following her frightening collapse at the Sept. 11 memorial ceremony — but detoured to daughter Chelsea Clinton’s apartment to keep details of her medical treatment under wraps, The Post has learned.

Secret Service protocol called for the Democratic presidential nominee to be rushed to a state-designated Level I Trauma Center in the wake of her Sunday-morning health crisis, sources said. In Manhattan, that would be Bellevue Hospital.

But a campaign operative, in a move that might have risked the candidate’s health, decided to change course to avoid having Clinton seen by doctors, nurses and other medical workers who could leak details to reporters, according to a source.

In addition, Clinton’s van was supposed to be escorted by an NYPD detail, but the Secret Service whisked her away from Ground Zero before cops could accompany her, another source said.

“As soon as she got into the vehicle, she was feeling fine. Her preference was to go to Chelsea’s. Based on an assessment of her condition and after having conferred with her physician, the staff and the Secret Service thought it was appropriate.”

Fallon also said that Clinton was running around Chelsea’s apartment, playing with her grandchildren. Fallon, Clinton, and Robby Mook have tried to convey this notion that while Hillary is sick, she’s powering through it, as if to diffuse the notion that she’s old, decrepit, and is…low energy. Another point is that because she had pneumonia and powered through events, she’s somehow a bad ass. Sorry—no. The potential president of the United States is going full speed ahead while fighting an illness that could kill people? That’s stupid. Seriously, not a Clinton fan and all (and I’m certainly not voting for her), but traveling with this schedule, with little to no sleep—will open yourself to possibly contract something serious. It’s totally innocent, but no—they had to keep this airtight. It failed. Are we bordering on paranoia here? An awful lot of effort was made to make sure pneumonia was kept in a secret file. ABC News’ Jonathan Karl called the glaring omission about this episode of Clinton’s health on behalf of her aides “borderline deception.”