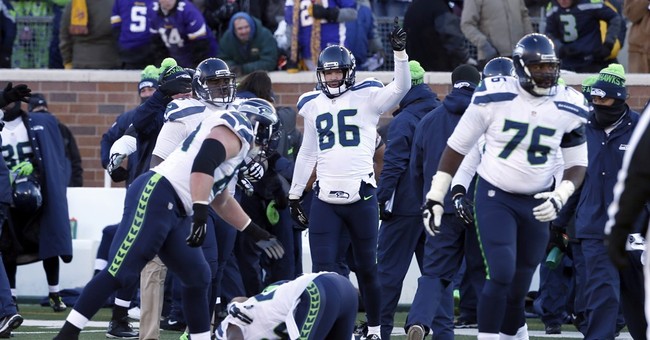 Kaepernick said, “I am not going to stand up to show pride in a flag for a country that oppresses black people and people of color.”

The Seahawks protest though was met with a different reaction due to the day, their season-opener against the Miami Dolphins falls on 9/11, and the fact tat their coach Pete Carroll is a 9/11 truther.

Well, according to wide receiver Doug Baldwin, the team will demonstrate something during the opening ceremonies later this afternoon, but they will remain standing, with arms interlocked to show unity for the cause of freedom and justice (via ESPN):

"We are a team comprised of individuals with diverse backgrounds," Baldwin said during the video. "And as a team, we have chosen to stand and interlock arms in unity. We honor those who have fought for the freedom we cherish. And we stand to ensure the riches of freedom and the security of justice for all people. Progress can and will be made only if we stand together."

Baldwin was asked Friday how proud he is of what the Seahawks have planned.

"I'm extremely proud," he said. "I'm excited. Extremely proud. Like I said, it makes me want to cry almost, just how our team has handled this and the discussions we've had and how we've come together. It's been absolutely amazing."