Clinton: Yeah, I’m Sorry I Said That Half Of Trump Supporters Were Deplorable...Sort Of 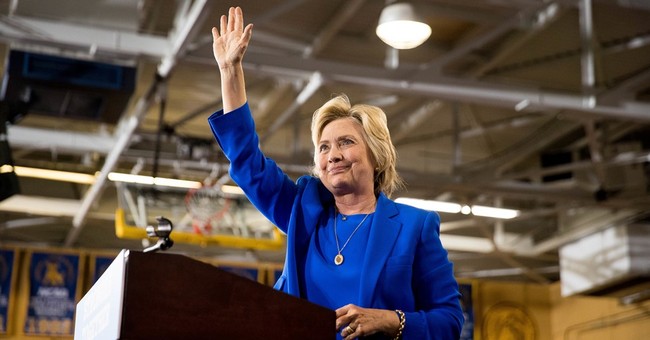 Well, we had Obama’s bitter clinger quote, Romney’s 47 percent remarks, and now we have Hillary Clinton saying you can place half of Republican nominee Donald Trump’s supporters in a “basket of deplorables.” The Democratic nominee made those remarks at a fundraiser Friday night, which was reported by Buzzfeed. The Hill had more:

You know, just to be grossly generalist, you could put half of Trump’s supporters into what I call the basket of deplorables," Clinton said, according to BuzzFeed News. "The racist, sexist, homophobic, xenophobic, Islamaphobic — you name it. And unfortunately there are people like that. And he has lifted them up."

Clinton said the other half are people struggling who have found hope in Trump's message.

"That other basket of people are people who feel that the government has let them down, the economy has let them down, nobody cares about them, nobody worries about what happens to their lives and their futures, and they’re just desperate for a change," she said. "They don’t buy everything he says, but he seems to hold out some hope that their lives will be different. They won’t wake up and see their jobs disappear, lose a kid to heroin, feel like they’re in a dead end. Those are people we have to understand and empathize with as well.

At her fundraiser tonight, Clinton says there are two types of Trump voters: half are in the "basket of deplorables" pic.twitter.com/OSjalkNXar

Well, given that she’s been trying to court more Republicans to her side, this probably isn’t the best way to do it. In fact, these remarks are just plain stupid. It once again highlights the puzzling phenomena of some prominent Republicans endorsing Clinton for president. This woman is trying to increase her bipartisan appeal…by unabashedly pushing a progressive agenda—and now, claims that half of GOP voters supporting Trump are deplorable.

Yeah, there’s not enough gold in Fort Knox to make me want to pull that lever for that woman. Over at Hot Air, Ed and Allahpundit noted a couple of things, namely that Clinton should get the media treatment Romney got (which was absurd) over his 47 percent remarks; that the alt-right is a tiny fraction of Trump supporters; and that the vast majority of those riding the Trump train are often too busy working to engage in the vicious racist garbage that the Clinton campaign is trying to peg to millions of voters. Ed aptly noted that the Trump campaign should unleash a torrent of ads featuring these hard working Americans, while noting how wrong it is for a liberal democrat to call them deplorable simply because they won’t vote for her. Allahpundit thinks that this move is meant to coax college-educated whites that she’s the lesser of two evils, while trying to move the attention to Trump’s racist supporters rather than her emails and the Clinton Foundation. He also added that Romney’s 47 percent and Obama’s bitter clinger remarks really didn’t do much to move the needle in any discernable degree in the 2008 and 2012 elections.

Well, now Clinton is walking back on those remarks…sort of (via Politico):

Last night I was ‘grossly generalistic,’ and that's never a good idea. I regret saying ‘half’ -- that was wrong," the Democratic nominee said in a statement.

But she also doubled down on previous comments she has made about the Republican nominee’s campaign apparatus and its embrace of “alt-right” supporters.

“But let's be clear, what's really ‘deplorable’ is that Donald Trump hired a major advocate for the so-called ‘alt-right’ movement to run his campaign and that David Duke and other white supremacists see him as a champion of their values. It's deplorable that Trump has built his campaign largely on prejudice and paranoia and given a national platform to hateful views and voices, including by retweeting fringe bigots with a few dozen followers and spreading their message to 11 million people,” the statement continued.

Trump released a statement of her own, saying that Clinton should be ashamed of herself:

Isn't it disgraceful that Hillary Clinton makes the worst mistake of the political season and instead of owning up to this grotesque attack on American voters, she tries to turn it around with a pathetic rehash of the words and insults used in her failing campaign?

"For the first time in a long while, her true feelings came out, showing bigotry and hatred for millions of Americans. How can she be President of our country when she has such contempt and disdain for so many great Americans?

"Hillary Clinton should be ashamed of herself, and this proves beyond a doubt that she is unfit and incapable to serve as President of the United States. I will be President for all of the people, and together we will Make America Great Again."

Clinton tried to focus attention away from her and onto  the alt-right and failed miserably when more details about her emails and the Clinton Foundation were released. This is bound to happen again when Wikileaks releases their promised document dump on the former first lady in the near future. Moreover, if Trump stays focused, which he has over the past few weeks, then the email fiasco and the Clinton Foundation, which has formed the bulk of his attacks against Clinton, will continue to permeate the media cycle. If Clinton should learn anything from this trip up, it’s that it’s never smart of slam the electorate. Trump’s Republican opponents tried to do that in the primary and wasn’t the best move; he’s now the nominee. Clinton’s remark just shows that the smug nature of American liberalism hasn’t changed. If you don’t live near the Acela Corridor, or don't have whatever credentials deemed necessary to enter the club in liberal land, you’re part of the “other America.” That’s all Clinton showed with these idiotic statements.

In knock against Clinton, Donald Trump retweets one of Obama's responses to Romney's 47% comment. pic.twitter.com/dbDswlRJ8e

"Mrs. Clinton's attack is itself deplorable. Her words offend all Americans and prove she is incapable of uniting this country after eight years of bitter divisiveness enabled by President Obama and his administration.

"She has told mine workers she will throw them out of work to placate her extremist, left wing special interest supporters. Who will she target next? She refuses to meet with law enforcement in order to placate her extremist, left wing supporters. And now she insults the entire country to curry favor and win approval from the same extremist special interests.

"Her repulsive words are more proof she is unfit to be commander-in-chief or lead this country."