Not A Cheerleader: Obama Calls Americans 'Lazy'... Culturally And Environmentally 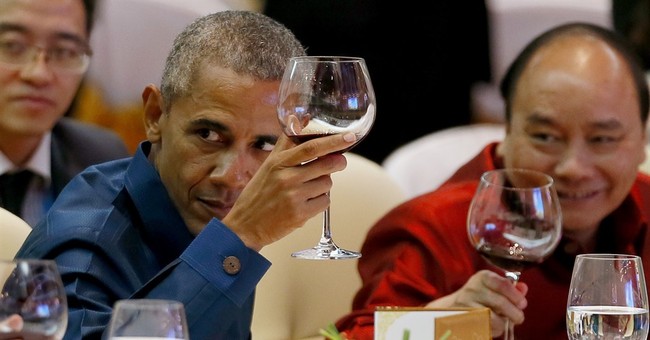 Remember guys; the Republicans are down on America. This country was already great. We own the finish line etc.—that’s been the narrative peddled by Democrats, which is that conservatives are down on America. We’re not down; just disappointed that we’ve had eight years in which the president has dithered on Syria, entered a toothless nuclear agreement with Iran, gave Iran a $1.7 billion ransom, did nothing to curb the national debt (it’s approaching $20 trillion), passed an unworkable, unaffordable health care reform law, and did nothing meaningful to address Russia invading Ukraine. Oh, and Yemen and Libya are still a mess. Yemen was labeled the blueprint for future counterterror operations. That all fell apart when the Houthi rebels more or less took over the country.

So excuse us if we can’t stomach your serial failure like smooth Chianti, Democrats. And it certainly doesn’t help when Obama flies aboard to bash the United States. Over at The Federalist, Bre Payton wrote about how the president described Americans as lazy multiple times in Laos. Obama was there for the Association of Southeast Asian Nations Summit. To make things more maddening, it was within the context of climate change:

Usually when you see the environment destroyed, it’s not because it’s necessary for development,” Obama said. “It’s usually because we’re being lazy and we’re not being as creative as we could be about how to do it in a smarter, more sustainable way.”

The United States is and can be a great force for good in the world. But because we’re such a big country, we haven’t always had to know about other parts of the world,” he said. “If you’re in the United States, sometimes you can feel lazy and think we’re so big we don’t have to really know anything about other people.”

This isn’t the first time Obama has insulted Americans abroad. During his visit to Malaysia last November, he said Republicans were helping ISIS.

At a town hall in Laos, President Obama twice suggested that Americans are "lazy" — culturally and environmentally. pic.twitter.com/Ij7kzKjW5C

Well, thank you, professor. First of all, do I need to remind you how wrong climate change activists have been over the past years? The projection that the arctic ice cap would be gone by 2013 was wrong; it grew by 533,000 square miles. Since that laughable projection, we’ve experienced a tornado season that was one of the quietest in six decades. We’ve had the calmest hurricane season in three decades, and the creation of 19,000-Manhattan sized islands worth of sea ice. Oh, and in 2012, the UK Meteorological Office found that global temperatures had at the time—stagnated for the past 16 years.

Reluctance to more environmental ways of living isn’t that Americans are lazy; we just don’t care—and that’s fine. It’s fine not to support policies that will make us poorer, less economically viable, and could potentially cost us trillions to reduce global temperatures by an amount that any person would find to be de minimis. None of the president’s climate change agenda would do anything to reduce global temperatures. It’s certainly not worth the amount we would be sacrificing in GDP. We already have enough energy resources to be self-sustaining energy-wise, Mr. President. We have enough coal, natural gas, and oil to meet those goals. Why not go for a more green energy route? Again, it’s because of the dubious costs and the fact that we have the resources and the means to extract them available. That’s just smart policy.

It’s also up for debate whether the green energy market could keep up with the demands of our heavily industrialized economy. At hospitals, there may not be room to have a rolling blackout. Oh, and the EPA has noted that we’ve never had cleaner air.

What this exchange proves (once again) is that Obama isn’t cheerleader for the country, despite notions to the contrary when he talks about Republicans being down America and the economy.