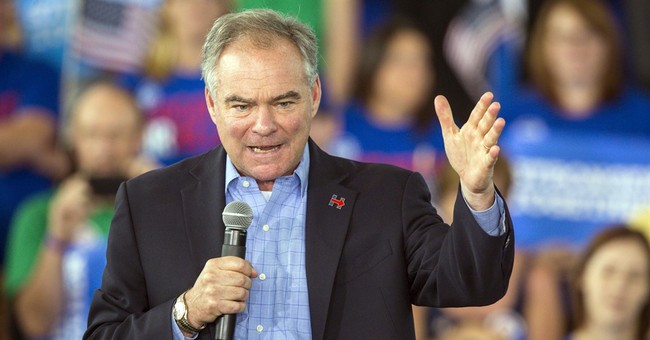 You have Vice President Joe Biden repeatedly pointing out the man who carries the codes to our nuclear arsenal at rallies (after slamming Trump for not having the temperament to handle that responsibility), and now Tim Kaine, Hillary’s running mate, says that the Clinton Foundation has stopped taking corporate and foreign donations right now. No, that’s not the case, sir. The folks in the Republican National Committee war room found this glaring inaccuracy during Kaine’s exchange with a reporter who asked why the power couple isn’t severing ties to their nonprofit sooner, which has become a point of contention on the campaign trail [emphasis mine]:

REPORTER: “With the questions on the Clinton Foundation, I know they said they are not going to foreign donations if she is elected president, but if you have been to a wedding when they yell ‘last call’ in 15 minutes, everyone runs to the bar. Should we just get out in front of this right now and say not going to take any…”

VICE PRESIDENTIAL CANDIDATE TIM KAINE: “Well I think it’s now, foreign donations, as of now, and then as a President, President Clinton will step aside from his connection with the Foundation. So she is taking one step forward right now, the Foundation is, taking one step forward right now by saying there some, there’s no corporations, no foreign connected contributions taken right now, and then if we are successful and are elected, President Clinton will sever the tie with the foundation he created.”

That’s not true, sir. The Clinton Foundation is still open to take those donations. It’s only if they’re elected, that they’re going to make that transition, which no one really believes is going to happen anyway. And this fact isn’t from the vast right wing conspiracy; it’s from The New York Times and other outlets.

Facing criticism for some of the donations given to his family’s philanthropy, Bill Clinton said on Thursday that the Clinton Foundation would no longer accept foreign or corporate money and that he would resign from its board should Hillary Clinton win the presidency.

Mr. Clinton’s announcement, which he relayed to foundation employees in a meeting on Thursday, followed the recent release of State Department emails mentioning donors to the Bill, Hillary & Chelsea Clinton Foundation who had contact with aides to Mrs. Clinton while she was the secretary of state.

Politico’s Nolan McCaskill wrote, “The Clinton Foundation will no longer accept foreign and corporate donations if Hillary Clinton is elected president” when the nonprofit made their announcement last month. It’s contingent on Clinton winning. It’s not happening now, Mr. Kaine. Moreover, even if Clinton does win, that won’t stop their nonprofit from violating these hypothetical pledges to stop taking foreign cash should Lady Macbeth win the election. Remember the same promise during her secretary of state confirmation hearings? Ed Morrissey sure does:

For the Clinton HIV/AIDS Initiative (CHAI), the foundation promised to seek a review and approval for any additional funds coming into the organization from foreign governments apart from the commitments already made. That meant going through both the State Department’s ethics division and the White House Counsel office. The MoU also confirmed that the foundation agreed to apply the same rules to all of its other units.

How did that work out the last time? Not well. The Washington Post reported in November that the foundation had to restate six years of tax documents to account for previously undisclosed revenue from foreign governments.

Honestly, if I were Kaine, I would be going through two bottles of Wild Turkey a day to cope with the endless nonsense I would have to dish out every day. Kaine is fighting media narratives against Clinton with soggy powder. Over the weekend, CNN’s Inside Politics panel with John King couldn’t control their laughter when Kaine said that Clinton talks to the press a lot.

On ABC’s This Week, he also said that Hillary used one only device, and that as a senator, he had trouble deciphering which information is classified serving on the Armed Services and Foreign Relations committees without having it pointed out to them because they look at so much information. This was his response when guest host Martha Raddatz touched upon the revelation that Clinton didn’t know that emails marked “c” meant classified. The latter isn’t the best defense, especially since Clinton headed the State Department and is an original classification authority.

Also, Kaine tried to say that Trump not releasing his tax returns was a serious issue, and that he was coaxing Russia to engage in cyber espionage. The tax returns are an issue, though one that has not led to an FBI investigation in relation to Clinton. In fact, the ethical issues regarding the Clinton Foundation and Hillary’s email fiasco are undeniably worse. Second, Trump wasn’t calling on Russia to hack us.

But getting back to the Clinton Foundation, it’s not true that they’ve just shut off the faucet on corporate/foreign donor money.