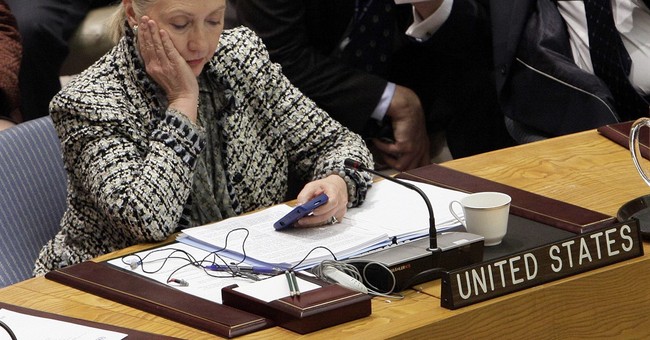 Please read Cortney’s post some of the FBI’s notes related to their investigation of Hillary Clinton’s private, unsecured email server. You’ll see that Clinton, who was an original classification authority in serving as secretary of state, apparently didn’t know that materials marked “c” meant classified. Now, we have The Washington Post’s Chris Cillizza pointing out that the Clinton apparatus went into panic mode after The New York Times published their story revealing that Hillary Clinton had conducted all of her official business on her private email server on March 2, 2015.

The next day, the House Select Committee on Benghazi sent a letter to Williams and Connolly, Clinton’s defense lawyers, for all records relating to the email addresses hdr22@clintonemail.com and hrc17@clintonemail.com. Three weeks after the initial publication of the story another member of former President Bill Clinton’s staff, whose name was redacted, discovered that he did not implement the necessary protocol for email retention for the Clinton email account. This person described it as an “oh shit” moment, which prompted him to delete the emails from the archive mailbox between March 25-31.

Here’s a shot of the notes detailing when the archive was…wiped clean. The Hill reported that Bleachbit is a special program aimed to prevent recovery of documents. Rep. Trey Gowdy (R-SC), the chairman of the committee, described the program as making file recovery so difficult to the point where “even God can't read them.”

You can read all of the notes here.