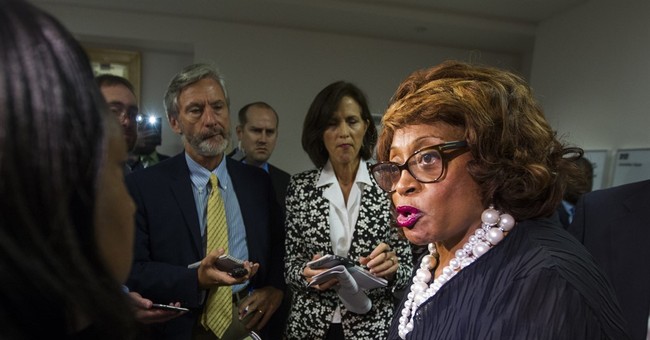 Do you guys remember soon-to-be-ex-Congresswoman Corrine Brown (D-FL)? Well, she was the lawmaker who thought the FBI could’ve stopped the horrific Orlando shooting if they hadn’t spent so much time looking into her fraudulent charity that pretty much acted like a slush fund, which led to 24 counts of fraud and corruption charges being brought against her.

First, let’s go back to what the Associated Press and WFTV 9 news reported back in July.

The 24-count indictment comes after an investigation into the purported charity One Door for Education Foundation Inc., which federal prosecutors say was billed as a way to give scholarships to poor students but instead filled the coffers of Brown and her associates.

Earlier this year, One Door President Carla Wiley pleaded guilty to one count of conspiracy to commit wire fraud after it was determined that she had deposited $800,000 into the foundation's account over four years. Over that time, federal prosecutors say it gave one scholarship for $1,000 and $200 to an unidentified person in Florida, while Wiley transferred herself tens of thousands of dollars.

According to the indictment, more than $200,000 in One Door funds were used to pay for events hosted by Brown or held in her honor, including a golf tournament, lavish receptions during an annual Washington conference and the use of luxury boxes for a Beyonce concert and an NFL game between the Washington Redskins and Jacksonville Jaguars.

She faces up to 357 years in prison. Her response to the charges was appalling, saying, “These are the same agents that was not able to do a thorough investigation of the agent [sic] and we ended up with 50 people dead,” a reference to the Pulse nightclub shooting in June. It was the worst mass shooting committed by an individual in U.S. history. Well, her time in Congress is up, as voters decided to boot her in light of her indictments (via Politico):

Democratic Rep. Corrine Brown, a 12-term incumbent who faced both redistricting and a federal indictment, lost her primary Tuesday in Florida’s 5th District, becoming the fifth House member to lose renomination this year.

Al Lawson, a former state legislator, had 47 percent of the vote to Brown’s 39 percent when the Associated Press called the race with 96 percent of precincts reporting. The heavily Democratic district is all but certain to elect Lawson in November.

Former Democratic Rep. Chaka Fattah, who has since resigned, lost his primary in Philadelphia earlier this year following an indictment, while Virginia Republican Rep. Randy Forbes and North Carolina Republican Rep. Renee Ellmers lost after being displaced by redistricting. GOP Rep. Tim Huelskamp of Kansas was defeated in a heavily ideological primary earlier this month.

Commentary’s Noah Rothman considered Brown and Fattah’s losses “a healthy sign” concerning voter accountability. We saw this sort of accountability in 2008 when former Congressman Bill Jefferson (D-LA) lost re-election in his heavily Democratic district to Republican Joseph Cao after it was discovered he accepted hundreds of thousands of dollars in bribes. It gained notoriety when $90,000 was found stuffed in his freezer when the FBI searched his home. He’s currently serving a 13-year prison sentence.

If Brown loses, that makes two indicted/convicted Dems who lost their primaries this cycle. A healthy sign.

Anyway, farewell, Ms. Brown—the gravy train is over, as is your career in public life, and possibly your time as a free citizen. None of this was the FBI’s fault.