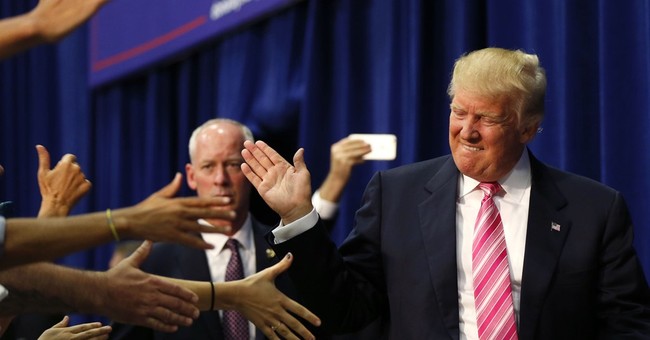 Donald Trump made a horrible comment about Khizr Khan’s wife, Ghazala, after their appearance at the Democratic National Convention. He wondered why Ghazala was silent on stage, maybe she couldn’t say anything —which was an obvious swipe at their religion; the Khans are Muslim. They are the parents of Army Captain Humayun Khan who died In Iraq 12 years ago. It led to many days of horrible news days for the Trump campaign, which saw his numbers tank across the country, especially in key swing states. It was an avoidable media disaster. Yet, veterans are sticking by the Republican nominee, noting that he’s something fresh after 15 years. And that they don’t particularly trust Clinton’s “adventurism” abroad—or at least that’s how the son of former Virginia Senator and 2016 Democratic candidate for president Jim Webb feels about the matter.

The Washington Post’s Thomas Gibbons-Neff and Dan Lamothe wrote that for other veterans, it’s a choice between an “a**hole” and a “corrupt hawk,” with the former being the better decision. Yes, some were mad at Trump for saying that he “always wanted” a Purple Heart, which was given to him by a veteran at a campaign rally, noting that there was probably an active service member with missing body parts watching the same remark. It left a bad taste in some of their mouths. Still, even while angry at the Purple Heart remarks (Gibbons-Neff and Lamothe added that some did feel they were taken out of context), these veterans are lock step behind Trump because he’s the “average Joe” (via WaPo):

“I think there’s a pretty sour taste in a lot of guys’ mouths about Iraq and about what happened there,” said Jim Webb Jr., a Marine veteran, Trump supporter, son of former U.S. senator Jim Webb (D-Va.) and one of McAllister’s platoon mates. “You pour time and effort and blood into something, and you see it pissed away, and you think, ‘How did I spend my twenties?’ ”

“There’s a mentality that they don’t want to see more of that,” he said, adding that he worried that a Hillary Clinton presidency would result in “continued adventurism,” given her record supporting interventions in Iraq and Libya.

Two recent national polls since the Democratic convention show Trump leading Clinton among military veterans — by 14 points in a Fox News poll and 11 points in a McClatchy-Marist poll. By comparison, Clinton shows a 10-point to 15-point margin among all registered voters in both surveys. The demographics of veterans align closely with Trump’s strongest sources of support: More than 9 in 10 are men, and about 8 in 10 are white.

His fans in the military community could prove critical in November in swing states with large military populations, including Ohio, Pennsylvania and Florida. In these three states, veterans represented at least 8 percent of the population in 2014, according to data collected by the Department of Veterans Affairs.

At a recent Trump rally in Wilmington, N.C., just 30 minutes from the back gate of Marine Corps Base Camp Lejeune, David Buzzard, a 26-year-old former Army specialist, said the Republican real estate magnate was not his “ideal candidate.”

I’d rather have an a–hole in the office who doesn’t have a filter than a pandering, corrupt hawk who has special interests in mind rather than the American public,” said Buzzard, who has the light outline of a scar under his left eye, the faint evidence of a roadside bomb that hit his patrol in 2011 in Afghanistan’s Wardak province.

Now, some of these veterans acknowledged that Trump isn’t the rational choice for them. One of them said he framed his 2016 choice as one where his heart says Trump but his mind is telling him Clinton. Another, a Marine, planned on writing in a third party candidate after jumping off the Trump train due to his remarks about Mexicans and Muslims:

For Webb, writing in a candidate or voting “out of protest,” is not an option. For all of Trump’s perceived flaws, Webb said, he thinks he is the strongest candidate.

“He is bringing a comprehensive re-examination of how we conduct business,” Webb said. “Whether it’s on taxes or it’s how we’re involved in the world, it’s very sorely needed.”

The choice between the a**hole and the corrupt hawk probably best sums up the veterans sticking with Trump, even through his parade of absurdities have only served in tanking his presidential ambitions thus far. Both candidates are weak on a whole host of issues and character questions. Both are widely unpopular.

Yet, Clinton only represents the established order and a political family that was on its way out until opportunity came a knocking. Trump, ironically, is of the same mold—giving money to various politicians across party lines over the years, including Clinton. He’s an insider. He admits that he’s profited from being in the loop, but has vowed to end the gravy train that has kept a rigged system in place. In the battle of Mr. And Mrs. Money bags (and yes, the Clintons are loaded), Trump’s perceived distance from Washington has earned him serious populist brownie points. Regardless, that’s irrelevant.

The son of a former Democratic candidate for president is a die-hard Trumpkin. Hillary Clinton is so horrible that veterans aren’t willing to jump ship en masse, even after the attacks on a Gold Star family due to Clinton’s perception that she’s only in public life for personal gain. Her support for intervention in Libya, a country in which we had zero interest to get involved whatsoever, also seems to make them incredibly uneasy about her judgment in foreign affairs. As with many voters grappling with this decision, we all know what Clinton is going to do. It’s a roll of the dice with Trump—and that mindset seems to be winning out with veterans. Given how Clinton has doled out serial lies about just her email system, which wasn’t approved by the State Department even though she said it was (a lie), is one of the many areas in which the former first lady’s honesty and trust numbers have been gutted. Would you trust Clinton after this, and the whole other ethical fiasco surrounding the Clinton Foundation as well? For veterans, and millions of voters, the answer seems to be a hard “no.”