To Stop The Appearance of Economic Collapse, Venezuela Banned Food Lines Outside Bakeries 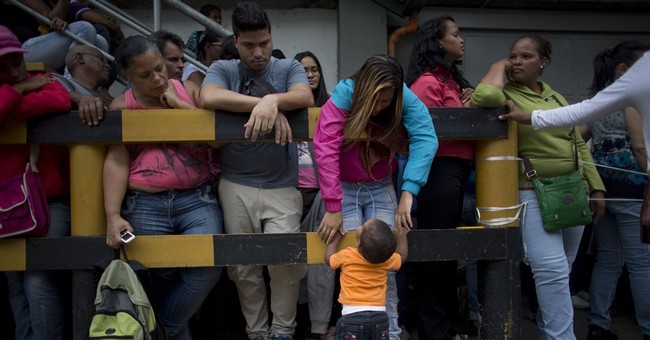 Venezuela has pretty much collapsed economically. The country that was the beacon of 21st Century Socialism has devolved into a total disaster zone. Medicine is scarce; food shortages have Venezuelans eating out of dumpsters; and the rolling blackouts have decimated the neonatal intensive care units that have led to a spike in infant deaths in the country’s hospitals. In fact, some of Venezuela’s hospitals lack basic items like gloves and soap. It’s to the point where some locations are operating as if it were the 19th century. So, to avoid the appearance that all socioeconomic life has deteriorated in the country, the government has banned lines outside bakeries because…they’re part of some bourgeois plot to undermine the government. Yeah, sure—and how many drops of acid have we consumed, President Maduro? (Via PanAm Post):

The Venezuelan government has announced it will be fining bakeries that make people stand in lines to buy bread.

The National Superintendency of Fair Prices noted this measure is intended to “dismantle the strategy of generating anxiety” in Venezuelans, as the lines are more of a political decision than they are a reflection of a lack of raw materials.

Shortages of food and medicine have recently reached 80 percent, according to estimates by the firm Datanalisis. Venezuelans must stand in endless line to obtain ever-scarce resources.

Oh, and to add more to the shortage of food aspect, people are now breaking into zoos to eat the animals. In Caracas, a black stallion was all but devoured by hungry Venezuelans at the Caricuao Zoo; only its head and ribs were left. Oh, and in case you were wondering if life under President Nicolas Maduro, the late Hugo Chavez successor, couldn’t get any worse, Venezuelans are now mandated to leave their current jobs for a period of 60 days to work in the fields. This is meant to help with food production.

Socialism sucks. Period. And it’s totally destroyed the country in case you’ve missed that too.