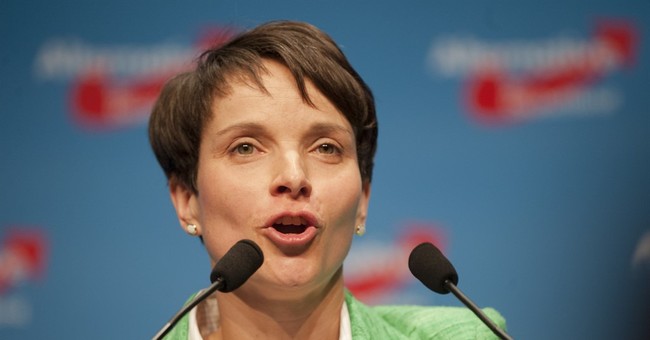 The Syrian refugee crisis continues to plague Europe; coupled with the rise in Islamic terror attacks on the continent has spurred some party leaders in Germany to demand that their gun laws be loosened to allow private citizens the right to defend themselves. T. Becket Adams of The Washington Examiner reported that Frauke Petry of Alternative for Germany is calling for a right to bear arms in her country:

A wave of sexual assaults and fatal Islamist attacks in Europe have some German politicians calling for a loosening of gun-control laws.

The leader of the Alternative for Germany party, Frauke Petry, said in a recent interview that Islamist attacks in Germany and elsewhere suggest that the German people should be able to arm themselves with firearms and other means of self-defense.

"Many people are increasingly feeling unsafe. Every law-abiding citizen should be in a position to defend themselves, their family and their friends," Petry said.

"We all know how long it takes until the police can get to the scene, especially in sparsely populated places," she added.

Yet, this is a tall order, especially from a party that’s only gained attention due to the refugee crisis. Becket did say that Alternative for Germany is poised to do well in the local elections in Berlin and Mecklenburg-Vorpommern. Here is Germany’s current guns laws, where, by the way, police can enter a gun owner’s home without a warrant to see if they’re complying with the country’s safe storage laws, despite a right to privacy that’s in their constitution (via Library of Congress):

Germany has one of the most stringent gun control laws in the world. The current Weapons Act deals with guns suitable for private ownership. It contains a highly differentiated regime for licensing the acquisition, possession, and carrying of permitted weapons that restricts, according to criteria of need, the number and types of guns that can be owned or purchased, and has specific age restrictions for different types of weapons.

Licensed gun owners are responsible for keeping their weapons under lock and key, and the law provides detailed specifications on the quality of the storage containers; these vary according to the potency of the weapons. Owners must inform the authorities of the safe-storage measures taken as well as allow the authorities to enter their dwellings for the purpose of monitoring compliance with safe-storage regulations.

It appears that such access must be granted without a search warrant, and, even though the German Constitution protects the privacy of the home, access cannot be refused if there is a threat of imminent danger. Random inspections, however, must be expected at any time and without any probable cause or suspicion. This increased right of the authorities to conduct inspections was enacted in 2009 in response to the Winnenden school shooting, and much has been said about the interpretation of this right.

It’s policies like this that liberal Democrats would love to implement here.