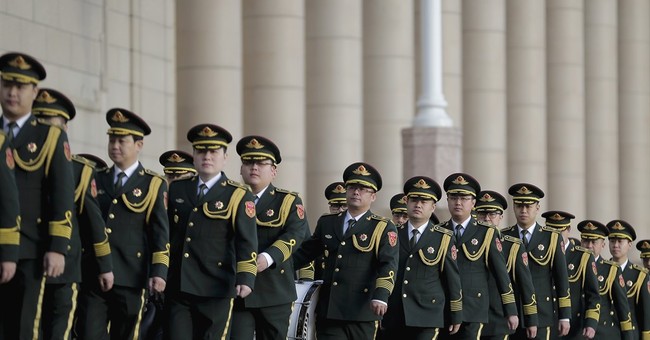 While many are wondering if we’re re-entering a Cold War mentality with Russia, we’re ignoring another threat in the east that seeks to challenge U.S. interests. China has built its first military outpost in Djibouti, just eight miles from the largest U.S. military base in Africa. China has long maintained itself as a regional power, though it never signaled its intent to expand it maritime presence—at least not officially. It always saw itself as the continental giant in the heart of Asia. For starters, it never had the logistical capabilities to move divisions of troops en masse to affected parts of the world. Nevertheless, the Chinese government has signaled that building overseas military installations is key to their strategic mission (via The Wall Street Journal):

It was February this year when camel drivers first spotted the Chinese troops staking out a patch of coastal scrubland about 8 miles from the largest U.S. military base in Africa.

Due for completion next year, the naval outpost is expected to feature weapons stores, ship and helicopter maintenance facilities and possibly a small contingent of Chinese marines or special forces, according to foreign officers and experts monitoring its development. Its cluster of low-rise concrete buildings and shipping containers, some with Chinese flags, offers the most tangible sign yet of China’s strategy to extend its military reach across the Indian Ocean and beyond.

In doing so, China is accelerating its transformation from an isolationist, continental nation to a global maritime power, a move that could challenge Western security partnerships that have underpinned the world order since 1945.

Hawkish Chinese officers have long called for foreign bases. Only recently was the idea incorporated into official publications on strategy, including a 2013 book produced by the People’s Liberation Army Academy of Military Science. It calls for China to establish “necessary overseas supply points and a limited force presence” abroad to protect lines of communication and “exert political and military influence in relevant regions.”

China says that this outpost will mainly assist in anti-piracy operations in the region, but the Journal also added that the Chinese presence here is also monitoring other nations’ activities, especially that of the United States. U.S. officials are also worried about China’s hacking capabilities, which are superb, that could force sensitive technology to be removed from the region to avoid being compromised. Yet, there are two things that could impact the long game of this Chinese global strategy. One is that their economy is declining, as they face a population crisis of their own (a lot of retirees and a workforce that may not be able to support them). The other is that it could draw China into various conflicts that would further drain its military, political, and economic resources. For now, China is flexing its muscles. For how long remains to be seen.