Louisiana Governor To Trump: Don't Come Down Here Just For A Photo-Op 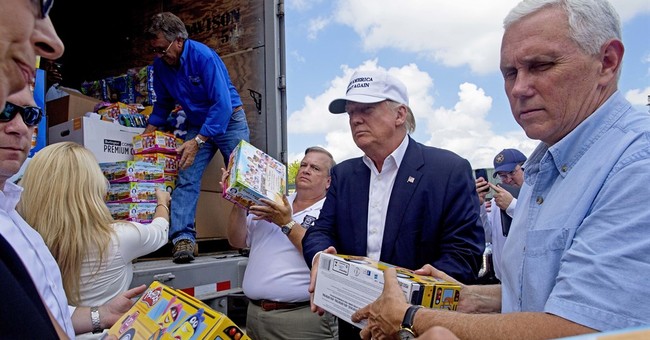 Republican nominee Donald Trump was welcome to visit the state of Louisiana after horrific floods have left at least 13 people dead. It’s the worst disaster since Hurricane Sandy. Trump ventured down into the Bayou State, but was warned by Democratic Gov. John Bel Edwards that his visit shouldn’t be used as a photo-op, and that a sizable donation or volunteering in disaster relief would be more preferable (via Reuters):

"We welcome him to (Louisiana), but not for a photo op," the governor's office said in a statement, urging Trump to volunteer or make "a sizable donation."

Trump told reporters he believed Obama should have cut short a vacation on Martha's Vineyard in New England to visit the area of flood devastation.

Some Louisianans and others, using the hashtag #wheresobama and #laflood on Twitter, had urged Obama to visit, and Baton Rouge's newspaper, The Advocate, voiced a similar view in an editorial published on Wednesday.

The Republican nominee didn’t call Edwards’ office regarding his planned trip, but was seen handing out aid to disaster-stricken residents. In fact, Trump received praise for his actions down South. The Daily Beast’s John Avalon gave Trump credit for going down there on CNN. In the LA Times, the publication described locals calling the arrival of the billionaire real estate magnate as a “a good little boost for folks who are tired”:

Terry Phinney was not always a fan of Donald Trump’s, but when the Republican presidential candidate arrived at his Baptist church to meet flood victims Friday, Phinney was impressed.

“It was a good little boost for folks who are tired,” said Phinney, 42, a church maintenance supervisor whose father’s home flooded.

“I came here to help,” Trump told victims, according to the Advocate newspaper.

Surrounding streets are piled with soggy furniture, insulation and drywall stripped from flooded homes and businesses, though the church was not damaged.

“He wanted to know percentages of homes damaged in the area, around about how many would have flood insurance,” Phinney said, adding that the candidate appeared to be “educating himself” about the disaster.

Even former U.S. Senator Mary Landrieu commended Trump for visiting the state, while adding that she hopes Hillary Clinton and President Obama head down as well.

I think it is. And I want to thank Mr. Trump for coming to Louisiana. I think the governor’s admonition about not using it as a press op is a good one, but he brought attention to our state, and we need that now, because, this disaster, [CNN’s Brianna [Keilar], is far larger than people can appreciate on television. And if you could see it from a drone’s prospective, and look down all of south Louisiana, this is not just a Baton Rouge area event. Livingston Parish, Ascension Parish, to the south central part of our state, and southwest, all the way over to Calcasieu. This was a horrible rain event, and as you know, Louisiana drains about 40% of the entire United States. So, even when the rain doesn’t sit over us like this did, even when it rains in Minnesota or Arkansas, we get the water. That’s one thing I want people to understand, it’s both a blessing and a burden to have too much water, and we have too much of it now, and it is really a serious disaster, and I hope Secretary Clinton will make her way down, I hope President Obama will make a visit. And we need all the attention and help we can get.”

Obama plans on visiting next week, as calls for him to cut his vacation in Martha’s Vineyard short intensified over the growing crisis. Obama is set to be on the ground in the disaster zone Tuesday.

In this instance, credit is due to Trump for his Louisiana visit. It’s also a tad maddening because it shows that if he were more disciplined—it’s quite possible he could be beating Clinton at this point. We needed this sort of behavior months ago. On Friday, at his rally in Erie, PA, Trump attacked Clinton on her record, her ethically questionable donations to the Clinton Foundation, and reached out to black voters, saying, “What the hell have you got to lose.” Trump noted that economic headwinds that face the black community and the Democratic Party’s utter indifference to it until election season starts. Again, it was a good rally—a good speech—but something that we needed from him day in and day out months ago. Let’s see what happens with the debates, but Trump should get high marks for his Louisiana trip and his attempt to pivot away from his destructive campaign style that has him losing big right now.