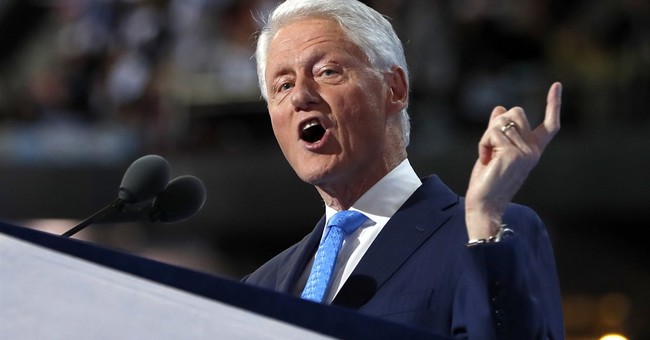 When it comes to his wife, Bill Clinton does get a little heated under the collar when people attack her on her trust and honesty issues, which directly ties into her ongoing email fiasco that has done considerable damage to her character. At a voter forum for the Asian Americans and Pacific Islanders on August 12, Clinton said the following:

“The FBI director said, when he testified to Congress, he had to amend the previous day’s statement, that she had never received any emails marked classified. They saw two little notes with a ‘C’ on it. This is the biggest load of bull I ever heard. They were about telephone calls that she needed to make. And the State Department put a little ‘C’ on it to discourage people from discussing it in public, in the event that the secretary of state, whoever it is, doesn’t make the phone call. Does that sound threatening to the national security to you? … And the truth is that it was a mistake for her to use her personal email, even though her predecessors had, and her successor John Kerry did, for a year until it was no longer legal. But she should have known there’d be a different set of rules applied to her if she ever ran for president. The truth is, when the State Department asked all the previous secretaries of state to give them any records that would help them fill out their records — because they didn’t have a lot of records — she was the only one who gave anything.”

Again, and this should be no surprise, the Clinton just can’t own it. And if they truly want this while fiasco to die off, they could’ve started that process months ago by actually being forthright about the whole dynamics of this whole affair. Instead, they keep peddling gross inaccuracies about the private email system, which forces publications to fact check, which reiterates and rehashes the lies they’ve told about the arrangement—and her trust numbers get hit again. It’s a vicious cycle, which any Republican could launch a successful attack against her. The problem is that Donald Trump is the Republican nominee, who can’t seem to get focused for the time being.

Then she added whether there were emails classified “at the time”: “I am confident that I never sent nor received any information that was classified at the time.” (July 2015)

Then she started specifying emails “marked” or “designated”: “I’m confident that this process will prove that I never sent nor received any email that was marked classified.” (August 2015) Clinton mostly used this “marked classified” language from then on.

Democrats often describe Clinton’s emails as nothing more than standard operating procedure among previous secretaries of state. This is misleading, and Bill Clinton should know better than to repeat it.

The State Department Office of Inspector General’s May 2016 report found Clinton’s email use should be evaluated in the context of the clearer guidance under her tenure, and the memorandums “specifically discussing the obligation” for officials to use department systems in most circumstances. These standards grew more detailed and sophisticated over time as technology advanced, not because “a different set of rules” were applied since she was expected to run for president, as Bill Clinton says.

Clinton’s case is not an apples-to-apples comparison to her predecessors or to her successor John Kerry for two major reasons: She was the only one to have operated solely on a private email server, and she had access to more electronic records than her predecessors.

Bill Clinton is correct that Comey “amended” his statement in the hearing, to provide more details about what the FBI had found. But Comey did not say Hillary Clinton “had never received any emails marked classified.” Two of three emails that had portion markings were call sheets that were improperly marked, and State Department considers the markings no longer necessary or appropriate at the time they were sent. Comey acknowledged that Clinton may not have known what the little-C marking meant.

The whole dispute over the little “c” versus big “C,” portion markings versus header, and so on, is the political equivalent of three-card monte. Democrats, like Bill Clinton, have cherry-picked Comey’s comments from the five-hour hearing to declare Hillary Clinton vindicated. But what they conveniently sweep under the rug are the 110 emails — which were not a part of the 2,000 that were retroactively classified — that were found to “contain classified information at the time they were sent or received.”

If the Clintons and the Democrats want to move on from this utterly avoidable email disaster, they can start by not repeating falsehoods about the whole matter. Alas, that’s not going to happen if you’re a Clinton, and get caught, you deny, deny, and deny some more.