Rumor Mill: Reince Warned Trump That The RNC Would Pull The Plug If He Can't Get It Together 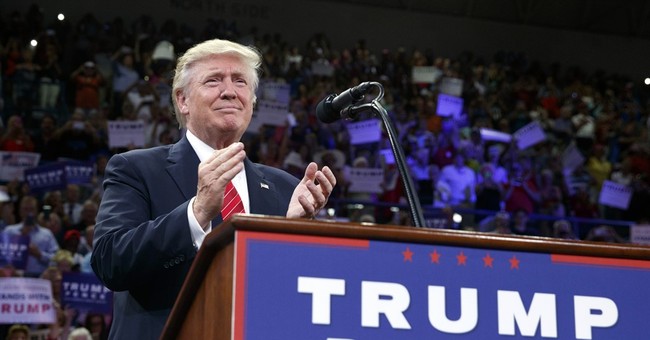 Is the Republican National Committee mulling a secondary protocol—that being all but abandoning Donald Trump and diverting resources down ballot? That appears to be what was discussed in Time, which detailed a presidential campaign that appears to be heading towards total disaster:

When Donald Trump mucks things up, the first person to let him know is usually Republican Party boss Reince Priebus. Almost every day, Trump picks up his cell phone to find Priebus on the line, urging him to quash some feud or clarify an incendiary remark.

The Wisconsin lawyer has been a dutiful sherpa to the Manhattan developer, guiding him through the dizzying altitude of the presidential race and lobbying the GOP to unite behind a figure who threatens its future.

But every bond has its breaking point. For this partnership, the moment nearly arrived in early August. Priebus was on vacation when he learned that Trump had declined to endorse Paul Ryan, the Speaker of the House and a close friend. The chairman had a frank message for the nominee, according to two Republican officials briefed on the call. Priebus told Trump that internal GOP polling suggested he was on track to lose the election. And if Trump didn’t turn around his campaign over the coming weeks, the Republican National Committee would consider redirecting party resources and machinery to House and Senate races.

The piece also illustrates the serial missteps this campaign has taken; the unnecessary attacks on the Khan family, who lost their son, Army Captain Humayun Khan, in Iraq back in 2004; the attacks on fellow Republicans; and the possibility of creating super PACs to destroy Sen. Ted Cruz and Ohio Gov. John Kasich’s political careers. On Khan, it was a losing battle, even if you could make the argument (and it’s plausible) and the family is now nothing more than being used as attack dogs by the DNC. Still, you’re never going to win a battle when you attack a Gold Star family.

The publication cited a Washington Post/ABC News poll, where 70 percent thought Trump handled the dispute, with 59 percent of Republicans agreeing. He’s down by double-digits in the polls, but even his staunchest critics say it’s too early to write off the billionaire:

History suggests that 8-point leads in August can melt like ice cream in the heat. Al Gore was down by that margin in August 2000 and came back to win the popular vote. In 1988, George H.W. Bush rebounded from a similar deficit to win the White House. Over the coming weeks, Clinton’s convention bounce may dissipate.

Trump hopes to reclaim territory in the debates. Yet, let’s go back to this whole down ballot buffer. First of all, Trump and the RNC denied that this conversation took place, or that it’s even being considered. So, there’s that aspect within this rumor mill. Over at Hot Air, Allahpundit (AP) noted that a) Reince is in no position to demand anything from Trump, which adds to the notion that the Republican nominee’s campaign is being truthful; b) the RNC is doing everything they can to avoid the appearance that they’re not doing enough to help Trump; and c) if the RNC were to consider pulling the plug, the endless attacks of this being a rigged election could ring true for Trump/GOP voters for this election. And possibly hurt the party for the 2018 midterms. This is why AP said that if this situation was true, Trump should call Reince’s bluff; screw me over­–fine, I’ll “paint the map blue” next cycle.

Still, it’s a rather alarming signal that 70 Republicans sent a letter to the RNC, demanding they do cut off funding to Trump’s campaign. Again, it’s probably unlikely that anything will come of this; it’s seems just as likely as Trump dropping out - which is never. Moreover, the Koch brothers and other Republican donors are expected to fill the war chests for down ticket races anyway.

As for the general election, is Trump dragging down the party down ticket? For some positive insight for an otherwise disastrous week in Republican media, the National Journal’s Charlie Cook noted that he’s somewhat skeptical that a Clinton win in November could trigger a cascade of Republican defeats in the House and Senate:

While I think that Clin­ton’s negatives are too high for her to win by a big, let alone land­slide margin, others are talk­ing up that chance and calculating the implications. People are of ten quick to remember the big Republican gains that accompanied Ronald Reagan’s 10-point, 51-41 point win in 1980, when he carried 44 states over President Carter, resulting in a 34-seat House gain and 12-seat Senate gain for Republicans. They tend to forget what happened in the other three big landslide presidential years.

In 1964, President Johnson beat Barry Goldwater by 22 points, 61 to 39 percent, carrying 44 states, according to Vital Statistics on Congress, but while Democrats did pick up 37 seats in the House, their gain in the Sen­ate was a single seat. In 1972, when President Nixon was pounding George McGovern by 23 points, 61 to 38 percent, and carrying 49 states, Republicans gained only 12 House seats and actually had a net loss of two seats in the Senate. For President Reagan’s “lonely landslide” in 1984—when he beat Walter Mondale by 18 points, 59 to 41 percent, and carried 49 states—his party gained only 14 House seats and again lost two Senate seats. The counter to those examples is that people are doing more straight ticket voting and less ticket splitting now than in those days.

Two factors make me suspect that even if Clinton wins by a much larger margin than, say, Obama’s win over Romney four years ago, I don’t think the down-ballot implications would be that huge. In the House, there are fewer competitive districts than at any point in our lifetimes; between natural population sorting and gerrymandering, there just isn’t much elasticity in the House these days. In the Senate, the GOP majority is absolutely on the line; my guess it will end up 50-50, give or take a seat or two, but given voters’ doubts about Clinton, the “don’t give Hillary Clinton a blank check” argument may well be a politically potent one, and a lot of hold-their-noses Hillary voters may well look for a check and balance down-ballot.

Still, even with Clinton’s unpopularity. The odds that Trump wins seems to be closing by the day, especially when he decides to go off the rails—an occurrence that’s becoming much too frequent. It’s become so bad that he’s dropped 17 points with his core constituency: white working class voters.

Amy Walter, also of the Cook Report, noted that even if Trump is able to rebound with white working class voters and non-college educated whites, Clinton easily captures the presidency. His erratic behavior has been magic in uniting a fractured Democratic Party, whose left wing elements so desperately wanted Sen. Bernie Sanders as their nominee. Whereas Republicans seemed to have been coalescing around Trump, Walter added that only 81 percent of Republicans are behind him. To make things grimmer, Walmart moms, the voters that could sweep him to victory—viewed that as a problem. Others thought he would start World War III:

Almost all the women in these groups had at least some level of college or technical school education, though fewer than half had a college degree. They were mixed in age and race. They were all undecided and/or soft supporters of one of the two candidates. In other words, they are the kind of “swing voters” that both sides should want to attract. Overall, these women were quite aware that the GOP was divided about Trump, and that it was a big deal. When asked if it mattered that the GOP was not united behind him, a woman in the Columbus group said “Yes. If you’re parents aren’t on the same page, it’s a problem.” In Phoenix, Connie, a 44 year old college graduate, worried that “whatever change he wants to bring he won’t have anyone to work with him…he’s not even getting along with his own party.” Stephanie, a 38 year old mom of two and customer service representative, is leaning toward Trump, but also worries that “he’ll do everything by executive order and take it too far.”

As we’ve seen/heard for months now, these women saw Clinton with a huge trust deficit (“liar” was used most often in describing their concerns about her), and they saw Trump with temperament troubles.(“he acts like a two year old,” said one woman in Phoenix, “and I have a two year old.”) But, these women were also resigned to the fact that Trump was not likely to change. Even those who said they were going to vote for him had a hard time defending his behavior. As one woman in the Phoenix group remarked, “I don’t trust Hillary Clinton on fighting terrorism, but Trump would get us into World War III.”

The most telling, however, was that while these women were less than enthusiastic about supporting Hillary Clinton themselves, they were nearly unanimous in their belief that she’d ultimately win the election. Overall, these women don’t trust Hillary Clinton, but Trump scares them. And, the unpredictability and rashness of Trump seems to be a bigger problem for them. If Trump had shown a side that was less impulsive and more focused, these women would likely be more open to him. But, as one woman in Phoenix remarked: “I think he could change, but he doesn’t want to change.” That, more than anything, underlines how difficult it is going to be for Trump to get these women - and those like them - to vote for him. And, while this race may tighten, Clinton’s lead with these types of traditionally GOP voters may endure.

So, one could suggest that if Trump were a bit more grounded in his rhetoric, he would be an easy alternative choice for Walmart moms, and other swing voters, who have a massive distrust in Hillary Clinton. Distrust that’s so deep it could force some voters to split tickets to avoid a unified Democratic government under her administration. This election is winnable for someone as weak as Trump, though his past antics have shown he doesn’t plan on changing anytime soon. And that window for the long-awaited presidential pivot is rapidly closing.