Ghosts Of Al Gore: It Seems Liberals/Media Are Worried That Voters Think Clinton Is After Their Guns 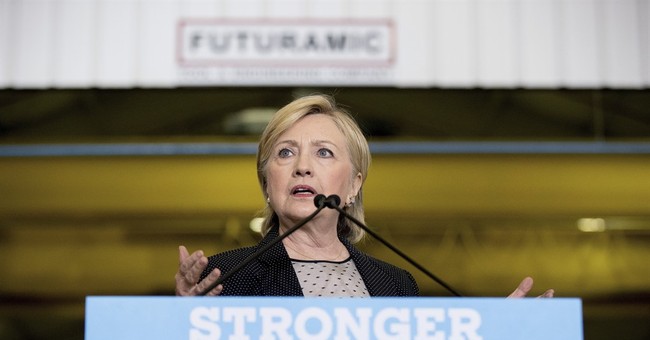 Donald Trump made a dumb joke that seemed to heavily insinuate assassination when talking about Hillary Clinton, the Second Amendment, and her possible judicial picks that would gut one of our oldest civil rights. It was a really bad joke, though Katie expounded on the notion (rightfully) that the media was using this to not only attack Trump, but also gun owners for being violent and unhinged. Not the case—and I did mention that Trump saying what he said wouldn’t activate gun owners, the vast majority of whom are law-abiding (even more so than law enforcement), like some assassin a la Manchurian Candidate. She also added that Trump’s remarks weren’t referencing assassination.

Nevertheless, it did touch upon something that is accurate about Hillary Clinton, though she might not know it (because most anti-gunners are oblivious), which is that her gun control policy would pave way for a severe gutting of our gun rights*.

First, the damage control being done across a variety of mediums seems to indicate that liberals are still haunted by the ghosts of Al Gore. Gore could’ve won the president without Florida, but went a little aggressive on gun control in 2000, which cost him Tennessee, West Virginia, and Arkansas. Those states, plus what he had already won would’ve seen him taking the oath in office in 2001, instead of George Bush (and saved us from an embarrassingly protracted legal battle). They seem to want to avoid that chasm of electoral death. From smaller outlets like the Providence Journal to CNN, the media seems to be explaining how Hillary Clinton doesn’t want to take our guns.

Has Clinton really proposed abolishing it?

No. Trump's repeated claim that Clinton "wants to abolish the Second Amendment" has been shot down multiple times by Politifact.com and FactCheck.org, and by Clinton herself. The view that Clinton favors repealing the Second Amendment gained traction when one of her policy advisers, Maya Harris, told Bloomberg Politics that the candidate believes that the Supreme Court's decision striking down a Washington, D.C., ban on handguns was "wrongly decided" and would result in further gun safety measures being overturned.

Once Clinton launched her 2008 Democratic presidential campaign, though, she backed away from some of those stances -- including her previous support for national licensing and registration of handguns.

“What I support is sensible regulation that is consistent with the constitutional right to own and bear arm. I think a total ban, with no exceptions under any circumstances, might be found by the court not to be (constitutional). But I don't know the facts," she said.

The best evidence of Clinton's shift in tone, though, came later in April in Indiana, after Obama had been recorded saying that people in rural America "cling to guns or religion."

"You know, my dad took me out behind the cottage that my grandfather built on a little lake called Lake Winola outside of Scranton and taught me how to shoot when I was a little girl," she said.

Again a candidate for president, Clinton has made her advocacy for new restrictions a focal point of her 2016 campaign.

She has called for a ban on the sale of assault weapons, as well as the closure of the "Charleston loophole" -- a reference to a law that allowed the Charleston church shooter to obtain his firearms. Closing that loophole would mean extending the window for FBI background checks to take place on gun purchases.

"I'm not looking to repeal the Second Amendment. I'm not looking to take people's guns away," she said. "But I am looking for more support for the reasonable efforts that need to be undertaken to keep guns out of the wrong hands."

Over at the left-leaning Mother Jones, Kevin Drum touched upon how the Supreme Court wouldn’t write an opinion to abolish guns, as there is ample legal precedent to justify it as an individual right (even Drum agrees that the Constitution guarantees an individual right to own a firearm). So, have no fear; Hillary’s crazy liberal justices won’t gut the Second Amendment:

…there's a general belief that if the Supreme Court overturned Heller, the individual right to own a gun would be dead. But that's nowhere near true. There's a very wide spectrum of decisions the court could hand down, and it would be very unusual indeed for them to write an opinion that flatly ended gun ownership as an individual right. It's almost certain that they would merely move the goalposts a bit, setting up some kind of balancing test that would preserve the individual right in some (or all) cases but would also put some boundaries on it—as they have for every other right in the Constitution.

If you're in favor of an absolute, unfettered right to bear arms, that's fine. I disagree, but it's fine. However, you simply can't say that the right is all or nothing. The Supreme Court virtually never takes that approach. Two centuries of both gun ownership and Supreme Court jurisprudence suggests very strongly that if they overturn Heller, they'll do nothing more than choose a modestly different middle ground.

Yet, Hillary’s anti-gun agenda isn’t going to be front loaded to the courts, though they will certainly be part of it. Clinton’s enthusiasm to repeal a law that protects gun manufacturers from frivolous lawsuits (Protection Of Lawful Commerce In Arms Act) lays the groundwork for anti-gun liberals to sue the gun industry out of existence. It was one of the reasons why a bill was drafted in 2005 to prevent gun manufacturers from bleeding to death due to shoddy lawsuits where victims of gun violence thought gun makers should be held liable.

In this hypothetical, threatening gun makers through lawfare, coupled with banning assault weapons, and her support for Australian-style gun control would certainly mean a massive undercutting of our civil rights; the mere fact that Clinton agrees with gun policy from Down Under shows that she’s for gun bans and confiscation. After all, that's the core of the policy. If Hillary knows that, she’s everything Second Amendment supporters, Republicans, and conservatives have thought about her. If she doesn’t know, she’s, again, everything that the Right thinks about typical liberals on gun issues: they don’t know everything. What doesn’t help Clinton in her “I’m not coming after your guns” defense, which she touched upon briefly in Philadelphia at the Democratic National Convention, is her refusal to say whether the Second Amendment guarantees an individual right to own firearms.

Yes, these fears about Clinton and the Democrats coming after Americans’ guns aren’t going away—and there's ample evidence to suggest that it shouldn’t. Always be vigilant.

*Yet, this is Hillary Clinton. She knows exactly what's she's doing.