Trump Was Referring to Second Amendment Voters, Not Assassination

Katie Pavlich
|
Posted: Aug 10, 2016 12:01 AM
Share   Tweet
The opinions expressed by columnists are their own and do not necessarily represent the views of Townhall.com. 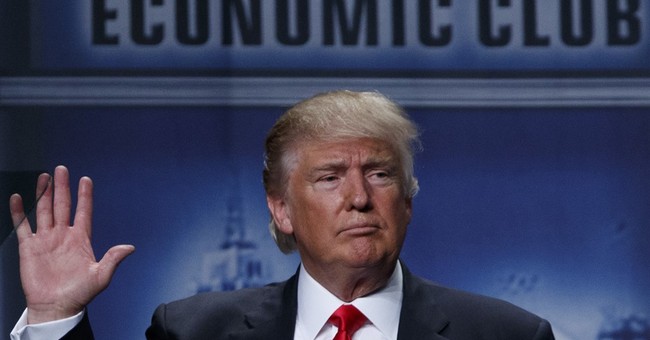 Yesterday Donald Trump did it again: He said something perceived to be outrageous, terrible and completely out of line. On top of it he, successfully diverted the news cycle for the foreseeable future away from Taliban sympathizer Seddique Mateen, the father of the Orlando Islamic terrorist who murdered 49 at a gay Orlando nightclub in June, attending a Hillary Clinton rally this week as a supporter.

What did he say this time? And how could it possibly be worse than the things he’s said before?

“If she gets to pick her judges, nothing you can do, folks. Although the Second Amendment people, maybe there is, I don’t know. But I’ll tell you what, that will be a horrible day,” Trump said at a rally in North Carolina.

He followed up the statement in an interview with the following to clarify, which in itself is a problem since explaining is losing (and yes, he’s losing is polling across the board).

WNCN:I do want to ask you about a comment that’s getting a lot of attention right now, related to Hillary Clinton and her judge picks, should she have the. Folks, who are second amendment folks, maybe they could take care of it. If you could explain what you meant.

The majority of those paying attention to the election, fueled by the mainstream anti-gun media which always falsely portrays Second Amendment supporters as cold-blooded murderers, took this as a call for the assassination of Hillary Clinton. It was actually a call for Second Amendment supporters to vote come November in order to stop Clinton from placing gun control activist justices on the Supreme Court. After all, Clinton has said the Supreme Court got the landmark cases Heller and McDonald "wrong" and supports Australian-style firearms confiscation.

First, lets get to the core of what Trump said, albeit more clearly the second time. The NRA has entire campaigns centered around gun rights voting. They hand out bumper stickers to members that read, “I’m the NRA and I Vote!” The NRA pours money into races on every level of government across the country and hires dozens of lobbyists to advocate for legislation its members can support and vote on. Regular emails are sent out to Second Amendment supporters in every state encouraging voters to contact their local legislators, Congressman and Senators about specific measures. The 2016 NRA Annual Meetings in Louisville were almost solely focused around defeating Hillary Clinton.

Because of this, the left is constantly painting the NRA, Second Amendment supporters, and gun owners overall as a powerful lobbying group with a “grip” on the legislative process on Capitol Hill. What they fail to publicly acknowledge, but clearly understand well due to a number of national gun control measures failing in recent years, is that all of these groups are made up of millions of people who vote in elections.  These “Second Amendment people” vote in droves, and despite what the Clinton campaign, her supporters, and allies in the media immediately conclude, they don’t assassinate people.

Many think Trump tried to tell a bad joke. Fair enough, let's say he did. Many Trump critics have said from the beginning that he’s a fraud hijacking the Republican Party. If he were joking (I don’t think he was, but instead incorrectly aligned his usual run-on sentence), he’s still a New York liberal trying to fit into a conservative, Republican skin. As Reason's Ed Krayewski noted on Twitter, who refers to Second Amendment advocates and supporters as “Second Amendment people”? The answer is someone who a) previously supported a ban on semi-automatic rifles b) supported and applauded President Obama's calls for more gun control after Newtown c) someone who doesn’t know Second Amendment advocates hardly at all, which is proven by his assumption they would be interested in assassinating someone for political reasons. Second Amendment supporters are the most peaceful people living in America and the statistics continually prove it.

The biggest problem here is Trump’s own doing thanks to the many egregiously inappropriate, flat out wrong things he’s said and indignantly stood by in the past: praising dictators, saying he can “shoot someone in the middle of 5th avenue” and his supporters won’t think twice about revoking their support, that protestors should be “carried out on stretchers,” etc. He's lost all credibility and has made it impossible for those against him to give even the slightest benefit of doubt.

In January, I signed on to National Review’s special “Against Trump” issue and have been critical of the candidate ever since. I stand by every word I wrote and to many on the right I’m a Clinton shill, an anti-American bimbo traitor and yes, someone who should be sent to the gas chamber because of it. Most recently I went after Trump for attacking the Khan family, whose son U.S. Army Captain Humayun Khan gave his life in Iraq while trying to save his fellow soldiers. I’m on record in multiple venues as staunchly anti-Trump and anti-Clinton. This isn’t a defense of Trump, but one of Second Amendment supporters who are constantly maligned and smeared in the media as crazy, gun-nut murderers. They aren’t.

There are many things to criticize Trump over, and believe me, I have, but this isn’t one of them.