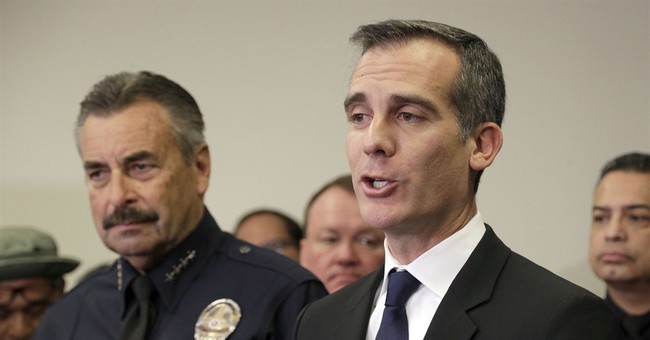 In the wake of brutal shooting against police—and officer-involved shooting deaths of black Americans—America’s mayors are worried about the state of law enforcement and community policing. They are also concerned about the makeup of their police departments, though Los Angeles is a notable exception. LA Mayor Eric Garcetti noted that the LAPD is now representative of the city’s communities. It’s a factor that was highlighted when Black Lives Matter protestors arrived at a recent LAPD graduation ceremony, according to Politico who conducted the survey. They stopped when they discovered that the recent class included eight white officers, 22 Hispanic, one black, one Filipino, and five Asian men and women. They later joined Mayor Garcetti at a news conference after the ceremony.

Now, some police departments aren’t representative of their communities, but that doesn’t mean strides have been taken to improve such relations between law enforcement. In Dallas, where five officers were recently assassinated on July 7, the number of white officers in some of the adjacent departments in the suburbs is twice the percentage as white residents living there. Still, relations are exceptional, with officers posing with Black Lives Matter protests on the night Micah Xavier Johnson opened fire.

Still, while America’s mayors are worried about police interactions within the minority communities, they’re even more worried about the safety of their officers. At the same time, even with high-profile and controversial police-involved shootings, notably Philando Castile in Minnesota, mayors still back their officers’ training:

Perhaps the one mayor in America no one wants to be right now—Mike Rawlings of Dallas—explained a political mood in his city that made sense of some data: Since the Brown shooting on Aug. 9, 2014, the department has been building up social capital, which it needed at just at the moment when the city was tested most. “I think that we were very fortunate,” Rawlings said. “If there is any fortune in this terrible tragedy, it’s that it came when it did.”

Rawlings, who came into office in 2011, suggested community policing reforms in his department had made strides with the community; he reminded Politico that many of the officers at the march were posing with marchers and joining in chants, just moments before shots rang out. “Because of the work that has taken place over the last three or four years in regards to police strategies, a focus on de-escalation, the money we’ve spent on community policing,” said Rawlings, “we were able to fall back on those.” While the Dallas Police Department is not particularly aligned demographically with it’s citizens, it is markedly closer than the suburban departments of Dallas County. As recently as 2014, four Dallas suburbs had more than twice the percentage of white police officers as they had white citizens.

The overwhelmingly Democratic mayors could hardly be said to have put race and policing on the back burner—a slim majority, 50.7 percent, told Politico that they were at least “worried” about the safety of people of color in officer interactions. But in a striking finding, that number paled in comparison when the question was reversed: Eighty-six percent of mayors suggested they were “worried” or “very worried” for their officers’ safety.

Tellingly, mayors resisted “Blue Lives Matter” and “Black Lives Matter” dichotomies—of the 36 mayors who expressed concern for the safety of people of color when they interact with the police, 35 did so, too, for the safety of their police. Only a minority of respondents indicated that they believe only one group—either the police or people of color—faces worrisome dangers while the other does not.

Mayors also seemed less inclined to indict their police officers, even in the aftermath of two controversial shootings of black men, Philando Castile and Alton Sterling. Asked to rank on a scale of 1 to 10 how well their police officers are trained to handle use-of-force situations, mayors gave an average ranking of 7.5—and just shy of 60 percent gave their officers an “8” or higher.

Still, there’s no one-size-fits-all when it comes to fixing or improving community policing. The best solutions and ideas come from local leaders, and that seems to be an underlying theme in the survey, especially when gauging Democratic mayors’ response to how Obama has handled the issue.