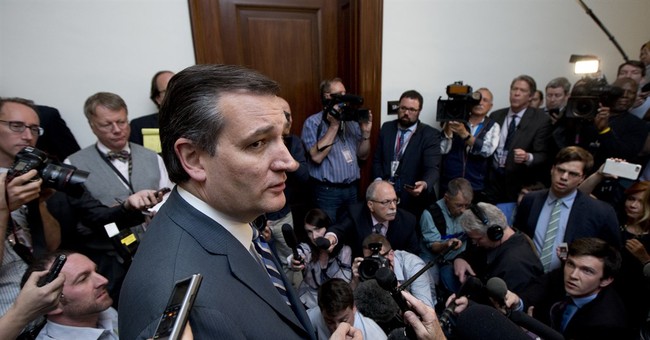 Sen. Ted Cruz (R-TX) was a subject of conversation and ire at the Republican National Convention. The conservative stalwart refused to endorse Republican nominee Donald Trump during hos remarks, which elicited loud boos from the attendees. It was a disaster. He was reportedly refused entry into the donor suite of Sheldon Adelson, a casino magnate who has given millions to the Republican Party.

Donors have also jumped off the Cruz train, leaving two questions. Why on earth would Cruz address the convention if he had no intention of endorsing Trump, something that the billionaire real estate magnate’s campaign knew beforehand. And is this the end of Cruz’s political career. He has little to no friends on the Hill—and a rapidly decreasing Rolodex back home. With no friends and significantly less cash, there’s a possibility that Cruz could face a primary challenge in 2018—and that appears to be what’s brewing in Texas (via CNN):

In the wake of Cruz's controversial speech at the party convention where he refused to endorse Donald Trump, the Texas senator's GOP critics believe there could be a new opening for an intraparty challenge. And behind the scenes, GOP donors and Texas politicians have urged Rep. Mike McCaul to consider mounting a bid against him in 2018, according to three sources familiar with the matter.

McCaul, a six-term congressman who chairs the House Homeland Security Committee, has not yet deliberated on the matter but has yet to rule out a potential Senate run, according to one source close to his House reelection campaign.

George Seay, a top Texas fundraiser, said he was aware of the chatter about a challenger to Cruz and praised McCaul's talent and ability to run a competitive race, even though he counts Cruz as a longtime friend.

"Mike is very well-networked within the donor class," Seay said. "He knows an awful lot of people."

The new organization added that someone who could pose a threat to Cruz is a candidate who is business-friendly and unite the moderate and pro-Trump wings of the GOP in Texas. Dan Patrick, the Lt. Governor, and George P. Bush, who recently endorsed Trump, are also names being thrown out there, but they’re not as entrenched in the donor network in the Lone Star State—plus they’re allies of Cruz. Then again, when has friendship trumped ambition? Still, it seems Rep. McCaul is going to be bombarded with people courting him to run against the consistent conservative, who is definitely going to run for president again. For now, the Cruz apparatus is now reorganizing itself to keep its grassroots army informed energized, and ready to do battle through a network of non-profits.

At the same time, CNN added that sources are telling McCaul, who is destined to shark his way up the House ladder, to only mount a challenge if Cruz’s support begins to deteriorate after 2016.

The Texas senator may be hated, but in his home state, he still runs the table electorally. Unlike the rest of the country, the Tea Party is alive and well—and that’s Cruz country all the way. Moreover, he’s a man who wasn’t registering any sort of substantial support against then Lt. Gov. David Dewhurst in 2012—he ended up winning the primary and the general due to his strength with the grassroots. All of this, plus the advantages that incumbency hoists upon politicians, has Cruz is a unique spot to comfortably win (as of now). If Trump loses big in November, his chances of winning increase. Nevertheless, he might have to do so with less cash. His approval with Republicans took a nosedive after his convention address, but that can easily be repaired in two years. So, there is a quiet war possibly be mounted against the senator, though I think he can breathe easy for now.