The Problem With Michael Phelps Being Our Flag-Bearer: Too Many White Dudes Have Hogged The Spotlight 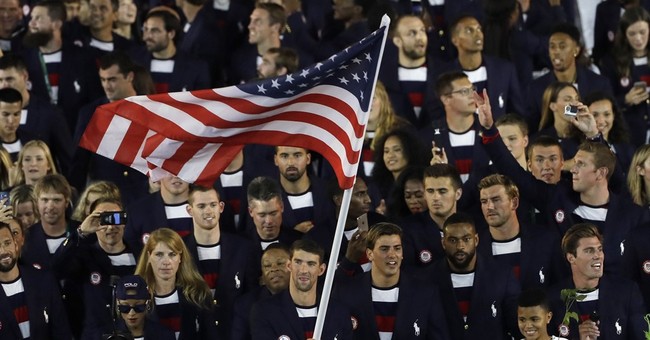 Nothing is safe from the Left. Nothing. We all know this, so it should come to no one’s surprise that liberals are not happy that Michael Phelps, arguably one of the greatest athletes of all time, was chosen to be our flag-bearer at the opening ceremony at the Summer Olympics in Rio De Janiero, Brazil. W. Kamau Bell, of CNN’s United Shades Of America, said that Phelps should’ve ceded the honor to Ibtihaj Muhammad. Why? In an open letter to Phelps, Bell feels that there have been too many white guys “hogging the spotlight”:

Thank you! I really appreciate the fact that you have made -- or will make -- the right choice here. You haven't announced it yet, but I'm sure you will soon.

Obviously, I am talking about what I hope will be your decision to decline the position as flag bearer in opening ceremonies of the Olympics in Rio De Janeiro on Friday. While you haven't said this yet, I'm sure this is what you are going to do, because you are not only an Olympic hero, you are -- by medal count -- the Olympic hero.

It shouldn't be a big deal for you to give up your spot. For one thing, according to the Los Angeles Times, the vote was close. So Muhammad must have lots of fans among the athletes. And also, let's be real here, Michael. It's not like you need the honor.

It would be a symbol for our country in this moment when we are mostly known for one of the most contentious, controversial, scandal-ridden, hateful, xenophobic, jingoistic, and just generally unlikeable presidential elections in recent memory.

Your stepping back will allow this moment to become something bigger than just another opening ceremony. No offense, but right now America has enough tall, successful, rich white guys hogging the spotlight trying to make America great ... again.

Well, first of all, Bell sort of makes the case that Phelps should be the flag-bearer, given that he’s the best. The Olympics is for the best of their nation’s athletes to compete, win medals, and represent heir country with pride, some might call that nationalism. And that’s a good thing. It’s not meant to be used as a vehicle for some politically correct, affirmative action exercise.

It’s a rather disgusting display of the progressive view of the world, in which everything is viewed through the prism of race. We’re not Americans. We’re all separated in rigid racial and ethnic lines, and to deviate from that ethos is akin to treason to one’s own assigned group. It’s inherently anti-American—and this form of balkanization isn’t a recipe for stability or unity. Just look at the region over the course of the 20th century.

I’m proud Phelps was our flag-bearer. I’m proud that those white guys have “hogged the spotlight” because that’s my country. Those white guys are my brothers. They’re our athletes—and that’s what’s lost in this cesspool of race-based politics that’s become the drug of choice for the Left to snort in their safe spaces upon being triggered by reality.

Oh, and as for Muhammad, I’m sort of glad she wasn’t our flag-bearer. She’s trashing our country by saying she doesn’t feel safe due to the anti-Muslim sentiment back home. She doesn’t feel safe—get a grip, lady (via The Daily Beast):

“[I feel unsafe] all the time. I had someone follow me home from practice and try to report me to police,” she said. “And this is right on 28th and 7th in New York City.”

“I’m very vocal about these things because I want people to know I'm not a novelty, I'm not special in any way, I'm a woman who wears hijab and these are my experiences,” Muhammad said.

Muhammad, who came second to Michael Phelps in the vote for who should carry the U.S. flag at the Opening Ceremony on Friday, said the country is at crossroads.

“I want people to know that as hard as [these racist incidents] are on me, they don't come even close to things we've seen like the shooting in North Carolina or the rhetoric around the Khan family at the DNC. It's ridiculous and we as a country have to change and I feel like this is our moment.”

Well, the attacks made against the Khan family by Donald Trump were inexcusable and wrong. We can all agree about that, but Islam isn’t a race—and America is safer than Pakistan, Saudi Arabia, Afghanistan, and certainly Somalia, who are known for their extensive record of treating women very well (said by no one). You made it on the U.S. delegation to the Olympics—the best of the best the country has to offer—and you off to say how unsafe the country is.