Hillary Clinton: You're No Job Creator 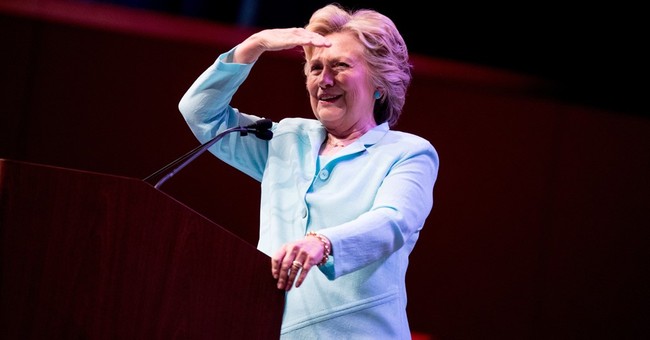 Hillary Clinton has made jobs her top priority if she’s elected president of the United States. Republican nominee Donald Trump has made the same pledge, claiming that he will be the greatest job producer God has ever created. Fair enough. We’ve all heard these same promises on the stump. And if you’re a New York resident, you may remember the time when then-Sen. Clinton said that she would create 200,000 jobs for the depressed Upstate New York region. That’s quite a promise—and one that she totally fell short on accomplishing.

For starters, it plays into some of the criticisms we’ve already heard about the former first lady, one of whom is that she poll tests everything—she and her husband, Slick Willy. Some of the initiatives she started to spur jobs growth in the region didn’t really create any jobs; most of the money was raised from undisclosed sources (and was spent of staff salaries and conferences); and the boards of these programs were staffed by people who have given Clinton over $100,000 to her campaigns since she started this failed crusade. Jeff Makron at The Washington Post had more:

Clinton’s pledge to help Upstate New York amid an early 2000s recession was risky, experts say. “To her credit, she really did focus on economic development upstate as a focus and as a purpose,’’ said David Shaffer, former president of the Albany-based Public Policy Institute, which compiles New York jobs data.

But Shaffer and other experts faulted Clinton for setting an unrealistic goal by promising to create 200,000 new jobs in a region struggling to retain existing positions. “As soon as I heard that, I thought, ‘Okay, some D.C. consultant sat around with focus groups to figure out what would sound good.

A day after announcing her 2000 candidacy, then-first lady Clinton vowed to infuse more than a half billion dollars into the upstate economy. A television ad ran just before the election, citing the 200,000 new jobs goal. Clinton won by more than 12 points.

In March 2001, she introduced seven bills to stimulate the upstate economy — “part of a larger partnership to spur job creation across our country,’’ Clinton said. None of the measures passed, records show.

The most authoritative jobs numbers are widely considered to be those from the U.S. Bureau of Labor Statistics (BLS). Multiple analyses of its New York data show that upstate actually lost jobs during Clinton’s first term.

How many jobs did the program create? “From a jobs perspective, I genuinely don’t remember,’’ said one person familiar with the organization, who spoke on condition of anonymity to discuss internal matters.

In eight years, New Jobs privately raised just over $1 million from undisclosed sources and spent the bulk of it on staff salaries and conferences.

Now, creating hundreds of thousands of jobs isn’t impossible. Florida Gov. Rick Scott, a Republican, was able to generate close to million jobs during his first term as governor. Yet, he also didn’t have his own iteration of New Jobs, which was stacked with his friends who would give him money for his political operation. Mrs. Clinton, you’re no job creator. And if upstate New York is any indication of the sterility of your jobs agenda–we’re in for another four years of rough economic growth.