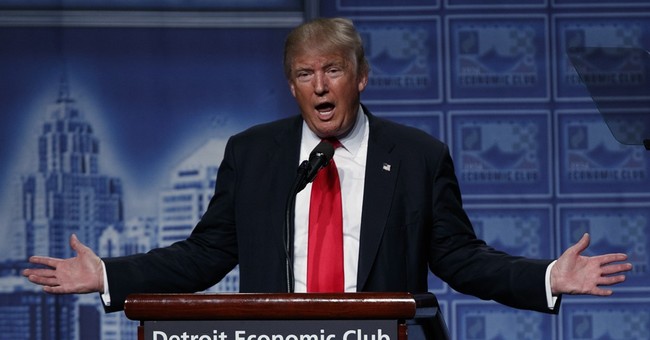 Well, after the Democratic Convention, a bump for Clinton was expected. Then, Donald Trump decided to attack a Gold Star family, who addressed the convention–the Khans–because they attacked him. And Trump had to respond because he felt it was personal, though every politician knows they can’t respond, nor should they care about what a bunch of Democrats say about you at their national convention. This is to be expected. Unless it’s something extraordinarily vicious, you have to go about your business in winning the election. In this instance, Trump fell into the trap. He responded, he looked like an idiot, and then he made it worse by not really apologizing for it. As a result, his chances for winning have tanked. Yes, it’s early, but we could possibly be in a bigger hole than previously thought.

Trump is reportedly trailing Clinton…in Georgia. If that’s the case, then we have a massive reconstruction effort to mount on a very tight timeframe—and it’s dubious whether Trump can get focused, back on message, and salvage the damage done by his wholly unnecessary spat with the Khan family that made him look far more unappealing than Hillary Clinton. If this was the point of having the Khans on stage, its execution was flawless. On top of that, his less than passive aggressive attitude towards members of his own party is another area that causing needless drama.

In the Peach State, the latest slate of polls having Trump down four points on Clinton; the latest by JMC Analytics had him trailing by seven points. Now, I’m not saying that Georgia will be the deciding factor, but it could be the humiliating coup de grace in what could be an Electoral College landslide for Clinton, especially with Trump’s chances of winning the Rust Belt decreasing at a precipitous rate (via The Hill):

He’s genuinely competitive in Ohio, where several recent polls have shown the race in an exact tie.

But beyond that, the picture is far brighter for Clinton.

Republican hopes of winning Pennsylvania have been dashed since 1988. President Obama carried the state by 10 points in 2008 and by 6 points in 2012. A new poll in the state, released on Thursday from Franklin & Marshall College, put Clinton up by 11 points.

The picture is similar in Michigan, which was also last carried by a Republican in 1988. Clinton is up 9 points in the latest major poll and by 6 points in the RealClearPolitics (RCP) average.

Wisconsin is somewhat closer but still comfortable for Clinton. She is up almost 6 points in the RCP average.

The New York Times’ Nate Cohn also discussed how Trump’s best path to win would be to reclaim Florida, Ohio, and Pennsylvania. The good news is that the GOP has won two of those states in past elections. The problem is that Pennsylvania hasn’t gone Republican since 1988. Losing the Keystone State, along with possible losses in Arizona and Georgia, is the ballgame. Virginia is also all but lost to Clinton. Now, if he had to choose which state would go for Clinton, Arizona or Georgia, he would pick Arizona, albeit by a narrow margin. Still, these are two reliably Republican states, which only highlight the weaknesses of Trump’s candidacy. Don’t get me wrong, Clinton could be in the same quicksand, but she doesn’t shoot her mouth off.

Over at FiveThirtyEight, where Clinton is now the undisputed favorite to win the election if it were held today (that wasn’t the case before), they note that Georgia really isn’t the decider of elections, but it could be in play in which even in the rosiest scenarios for Trump, could be an interesting state that could help Clinton put her over the top. In one scenario, where Trump wins Minnesota, Iowa, Wisconsin, Pennsylvania, and Ohio. He loses to the former first lady 275/263. Clinton would in turn, take North Carolina, Virginia, Florida, and Georgia.

In another hypothetical, Clinton wins Georgia, Virginia, North Carolina, Michigan, and Minnesota, while Trump takes Florida, Ohio, Pennsylvania (the three states he needs to win), and Wisconsin; Clinton wins by two votes 270/268. Yet, the reason why these guys think Clinton could win Georgia is that she's not doing as badly with white voters as Obama:

In these maps, Georgia is part of a “New South” backup plan for Clinton if Trump’s plan to win states in the Midwest and Northeast is successful. In these examples, you’d imagine Trump appealing to white voters without a college degree in states such as Iowa, New Hampshire, Ohio and Pennsylvania. Clinton then counters these victories by appealing to voters in the more diverse Southern states with growing populations, including Florida, Georgia, North Carolina and Virginia. All of these states are at least one-third nonwhite.

The African-American population in Georgia, in particular, has grown a ton in recent years. Black voters made up just 23 percent of Georgia voters in the 2000 election compared with 30 percent in the 2012 election. Much of this growth has occurred in the Atlanta suburbs, in Rockdale and Clayton counties. Not surprisingly, those two counties are also first and fourth, respectively, in terms of the U.S. counties that trended the most Democratic from the 2000 to 2012 election.

Of course, having a large minority population isn’t a guarantee that a state will go Democratic (see Alabama, Mississippi, Texas, etc.). The white population in most of these states leans overwhelmingly Republican, but a Democrat, in order to carry the state, has to do not terribly with white voters. In 2012, President Obama lost white voters by about 60 percentage points in Georgia. That’s better than he did in Alabama and Mississippi but not good enough to carry the state. Obama lost white voters by between 25 and 35 percentage points in Florida, North Carolina and Virginia in 2012, all states that were competitive that year. The AJC poll, meanwhile, has Clinton losing white voters by just 37 percentage points.

Combine the trend of well-educated voters and Trump’s earning of just 2 percent of support black voters in the AJC poll, and Clinton has a real shot to win Georgia.

All right–where’s the Wild Turkey?